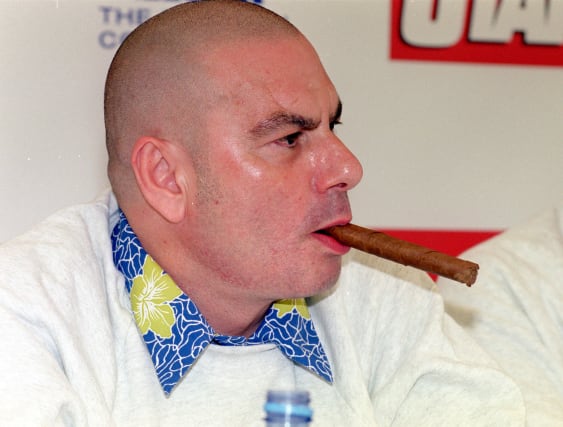 Eric Hall, the former showbiz and football agent, has died aged 73 after a short illness.

Hall made his entry into the music business as a tea-boy alongside a young Elton John, and would later go on to represent some of the Premier League's biggest names in the 1990s.

His death was announced by the radio station where he worked, Time 107.5FM.

Famed for a trademark cigar and 'Monster monster' catchphrase, he made deals on behalf of household names Dennis Wise, Tim Sherwood and Neil Ruddock.

Tributes to Hall have been paid by Sir Alan Sugar, who called him a "real character", while Stan Collymore tweeted: "Larger than life, great great fun, sad to think Eric Hall has passed."

After giving up acting school at 15, Hall went on to promote records for stars like Frank Sinatra, the Bay City Rollers and Clive Dunn – of Grandad fame – and claimed to have launched the careers of Queen and Cockney Rebel.

When the Sex Pistols sparked fury with their infamous four-letter outburst at TV presenter Bill Grundy in 1976, Hall was the agent who booked them onto the programme.

He moved into football in 1986, after a chance meeting with Tottenham's Steve Perryman when in a nightclub with friend Terry Venables.

Six years later and the establishment of the cash-rich Premier League helped elevate the stock of players represented by Hall and others in the business.

He became critically ill with the E.Coli bug and septicaemia in 1997 but recovered and spent his later years on the airwaves, hosting a show on independent station Time 107.5FM.

Station manager Lorna Waters said: "We were incredibly lucky to have Eric here as part of our team for almost seven years.

"He amazed us with the calibre of guests he would invite onto his show and his knowledge of music was undoubtedly second to none.

"He has brought a lot of joy to many people with his radio shows over the years and Sunday afternoons will never be the same.

"Personally, I will miss his weekly phone calls checking in that his show was still getting good ratings and discussing his fan base. He was a true legend and a real gentleman who touched my life in many ways."