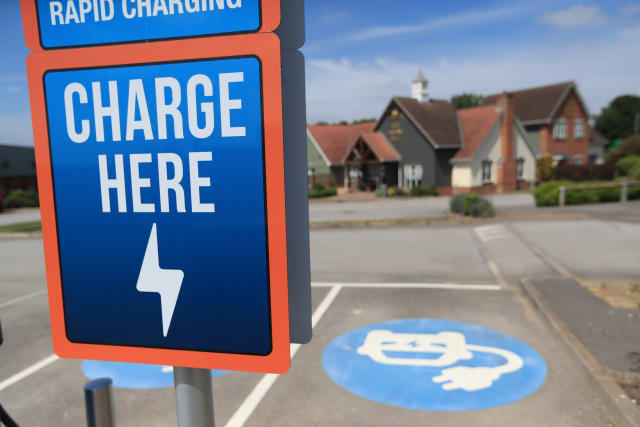 Sales of new petrol and diesel cars and vans will be phased out by 2030, Boris Johnson has confirmed as he set out his 10-point plan for a "green industrial revolution".

The move brings the ban on new conventional cars and vans forward by a decade, from a planned date of 2040, though the sale of some hybrid vehicles will be allowed until 2035.

It aims to accelerate the transition to electric vehicles to cut climate emissions and local air pollution, as part of the 10-point plan to boost jobs and drive the shift towards cutting emissions to net zero by 2050.

The Prime Minister outlined new investment of £1.3 billion to accelerate the rollout of chargepoints in homes, streets, and on motorways, to make electric vehicles easier to charge up, and £582 million in grants for those buying zero or ultra-low emission vehicles to help reduce the costs.

Nearly £500 million will be spent in the next four years for the development and mass-scale production of electric vehicle batteries, helping to boost manufacturing bases including in the Midlands and North East, he said.

The Government will also launch a consultation on the phase out of new diesel HGVs to clean up freight transport, though no date has been set.

Elsewhere in the 10-point plan, there are moves to have the UK's first town entirely heated by hydrogen by the end of the decade, a renewed push on nuclear power and support for restoring nature and for walking and cycling.

Mr Johnson, who has already highlighted plans to power every home in the country by offshore wind within 10 years as part of his vision, said the moves would support up to 250,000 jobs.

The Government also said new investment formed part of £12 billion mobilised for the plan, though Labour said only £4 billion of the funding was new and called for a much bigger investment in a green recovery.

The UK has legal a target to cut greenhouse gases to net zero by 2050, requiring huge cuts to emissions and any remaining pollution from hard-to-treat sectors such as aviation "offset" by measures such as planting trees.

There is also pressure on the UK to set out ambitious action to tackle the climate crisis as hosts of the United Nations Cop26 summit which was delayed by the pandemic and is now taking place in Glasgow in November 2021.

The widely trailed move to bring forward the phase out of petrol and diesel cars comes in the wake of guidance from the Government's advisory Committee on Climate Change which said it should be implemented by 2032 at the latest.

The committee has also called for greater action in other areas such as cutting the carbon from heating homes, as the UK is off track to meet its climate-tackling goals.

Mr Johnson said: "Although this year has taken a very different path to the one we expected, I haven't lost sight of our ambitious plans to level up across the country.

"My 10-point plan will create, support and protect hundreds of thousands of green jobs, whilst making strides towards net zero by 2050.

"Our green industrial revolution will be powered by the wind turbines of Scotland and the North East, propelled by the electric vehicles made in the Midlands and advanced by the latest technologies developed in Wales, so we can look ahead to a more prosperous, greener future."

The areas the 10-point plan focus on are:

– Offshore wind: Producing enough offshore wind to power every home by 2030, supporting up to 60,000 jobs.

– Hydrogen: Creating the capacity to generate low carbon hydrogen for industry, transport, power and homes, and aiming to develop the first town heated entirely by hydrogen by the end of the decade.

– Nuclear: Advancing large scale nuclear plants and developing the next generation of small and advanced reactors, which could support 10,000 jobs.

– Homes and public buildings: Making homes, schools and hospitals greener, warmer and more energy efficient, including a target to install 600,000 heat pumps every year by 2028.

– Carbon capture: Becoming a world-leader in technology to capture and store harmful emissions away from the atmosphere, with a target to remove 10 million tonnes of carbon dioxide by 2030, equivalent to all emissions of the industrial Humber.

– Nature: Protecting and restoring the natural environment, including planting 30,000 hectares of trees every year.

– Innovation and finance: Developing cutting-edge technologies and making the City of London the global centre of green finance.

As well as investment in electric vehicles, the Government said there is an extra £1 billion next year for energy efficiency and up to £500 million to develop new hydrogen production facilities and trial homes using hydrogen.

An extra £200 million of new funding will go towards creating two clusters of carbon capture and storage infrastructure, there is a £525 million boost to nuclear power and £20 million for a competition to develop clean maritime technology.

But shadow business secretary Ed Miliband warned the funding did not "remotely meet the scale of what's needed to tackle the unemployment emergency and climate emergency we are facing".

He said only a fraction of the funding for the plan was new, adding: "We don't need rebadged funding pots and reheated pledges, but an ambitious plan that meets the scale of the task we are facing and – crucially – creates jobs now.

"That's why Labour called for the Government to bring forward £30 billion of capital investment over the next 18 months and invest it in low-carbon sectors now as part of a rapid stimulus package to support 400,000 additional jobs. "