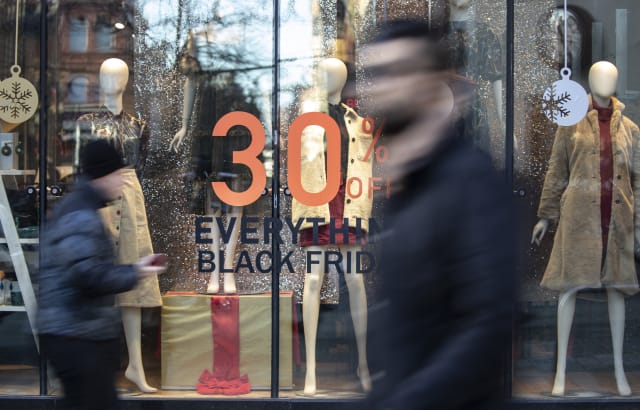 Around a quarter of Christmas shoppers are more likely to wait for discount days such as Black Friday before they start making purchases than they were in 2019, a survey has found.

Some 26% of people said they are more likely to hold back until “special offer” days such as Black Friday (November 27) before they buy, according to money app Yolt.

In total, more than a third (35%) of people said they would be looking to take advantage of upcoming discount days in some way, with nearly a fifth (18%) stating they do all their shopping for Christmas and birthdays on discount days and during sales.

Black Friday and Cyber Monday shoppers said they tend to spend £120 on average on these days.

Many people have suffered income shocks this year amid job losses, pay cuts and employee furloughs due to the coronavirus pandemic, making the need to stick to a Christmas budget even more vital than usual.

Nearly a quarter (23%) of people said they are going to have to dip into savings that were not allocated for Christmas this year.

But some who have kept their jobs and perhaps also saved money on their usual commute and social habits have managed to put extra money aside during lockdown.

Yolt found that nearly a fifth (19%) of people plan to spend more on Christmas this year, expecting to fork out an extra £240 typically compared with 2019.

It released the findings to mark the launch of new features on its money app for iOS customers, with new features for Android customers following in 2021.

Pauline van Brakel chief product officer at Yolt said: “Discount days can help ease what is for many a very expensive time of year – having said that, people should try not to overspend and risk getting themselves into debt.”

More than 2,000 people were surveyed across the UK in October.