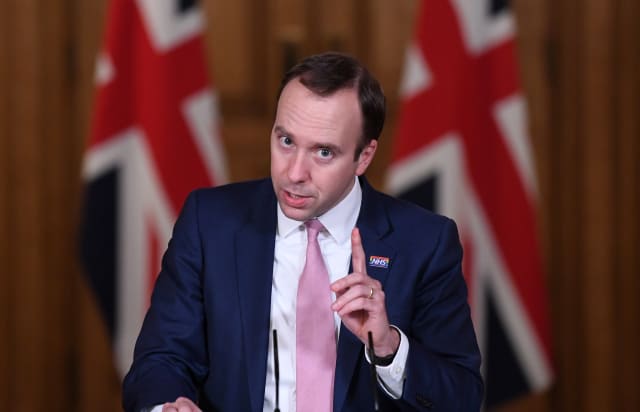 Matt Hancock was unable to rule out an extension to the lockdown as a health chief warned the tiered system that ministers want England to return to may have to be strengthened.

The Health Secretary said it was “too early for us to know” whether coronavirus cases will be brought down sufficiently to ease the second shutdown on December 2.

Boris Johnson hopes the nation will return to local restrictions, but Public Health England’s Dr Susan Hopkins – standing alongside Mr Hancock at the Downing Street press conference on Monday – said the lowest tier of earlier measures had had “little effect”.

Dr Hopkins, who is advising the Government’s Covid-19 response, said they would have to consider strengthening the measures “to get us through the winter months until the vaccine is available for everyone”.

That goal of securing a vaccine moved a step closer after early data showed a new jab to be almost 95% effective in protecting against the virus.

Scientists welcomed the “tremendously exciting” news that US firm Moderna’s jab may be highly effective in preventing people getting ill and may work across all age groups, including the elderly.

Mr Hancock said “great advances in medical science are coming to the rescue”, but admitted the UK had only secured five million doses of Moderna’s jab.

“While there is much uncertainty, we can see the candle of hope and we must do all that we can to nurture its flame,” he said.

“But we’re not there yet. Until the science can make us safe we must remain vigilant and keep following the rules that we know can keep this virus under control.”

The UK has already secured 40 million doses of a vaccine from Pfizer/BioNTech, which uses the same technology as Moderna and should be in the UK before Christmas.

But the Government did not place orders with Moderna at the same time and a Government spokesman said the jab would not become available until “spring 2021 in the UK at the earliest”.

Benefits of the Moderna jab include it being easier to store and transport because it can be kept in a conventional freezer for up to six months while the Pfizer/BioNTech vaccine needs to be kept at minus 70C.

With Conservative backbenchers pressuring for the Prime Minister not to extend the lockdown next month, Mr Hancock said they do not yet have the data to understand its impact.

“It is too early for us to know what the number of cases will be as we come to the end of the current lockdown,” the Health Secretary said.

“But we absolutely hope to be able to replace the national lockdown with a tiered system similar to what we had before.”

Dr Hopkins said that Tier 2 of the local restrictions appeared to have worked in some areas but “not so well in others”.

“We see very little effect from Tier 1 and I think when we look at what tiers may be there in the future, we will have to think about strengthening them in order to get us through the winter months until the vaccine is available for everyone,” she added.

Her comments came as the Government announced a further 213 people had died within 28 days of testing positive for Covid-19 as of Monday, bringing the UK total to 52,147.

In Scotland, First Minister Nicola Sturgeon will make an announcement on Tuesday over lockdown restrictions.

She has said that areas with “stubbornly high” levels of the virus could be temporarily placed under more severe restrictions to give more flexibility for a “limited and careful easing” of the rules over Christmas.

Meanwhile, the Prime Minister is continuing to self-isolate after a meeting with MP Lee Anderson, who tested positive for Covid-19.

Tim Peto, a professor of medicine at Oxford University, said rapid tests should be employed to help people out of quarantine more quickly.

“There is a simple way to take a belt and braces approach – we should be operating a system which allows him [Mr Johnson] to take a rapid test and be back in Parliament the next day,” he told the Telegraph.

“The current system simply hasn’t adapted to the knowledge that we have got. We need to be using these tests to let people out of quarantine far more quickly.”