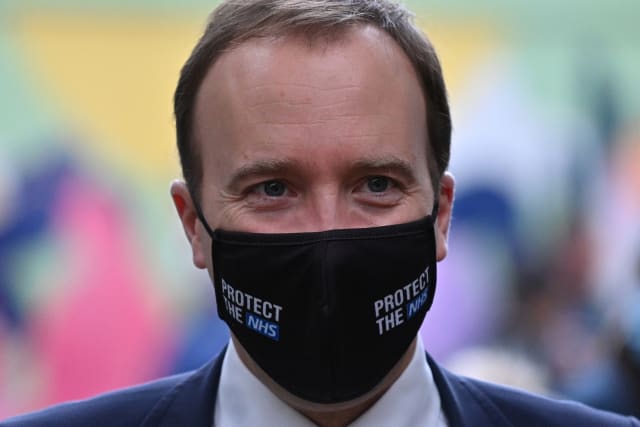 Matt Hancock has defended the “extraordinary broad range of companies” employed by the Government during the coronavirus pandemic.

The Health Secretary said that the government “had to” work with the private sector in its work tackling the virus.

He likened the Covid-19 testing programme to “building something that’s basically about the same size of Tesco in six months”.

The comments come after he was probed about a Sunday Times report which said that the Government had awarded £1.5 billion to companies linked to the Conservative party during the pandemic.

But he suggested the story was not a “fair or accurate reflection” of the awarding of the contracts.

He told Times Radio: “We’ve brought in an extraordinary broad range of companies and many of them who haven’t been working with Government before because we haven’t had a pandemic of this scale before.

“And the need to do that at pace and build this half a million testing capacity that we have today. We built that almost from scratch.

“So the scale of the operation – building something that’s basically about the same size of Tesco in six months – has been incredible. So we absolutely have had to work with the private sector to have this happen.

“We’ve been doing that as quickly and as effectively as we possibly could in what were very, very challenging circumstances.

“In this pandemic we’ve completely put aside politics, it’s all about what can we do to keep people safe and get the country back on its feet.”

“That’s the nature of what happens when you bring in a huge range of people to help with what has been a massive challenge.