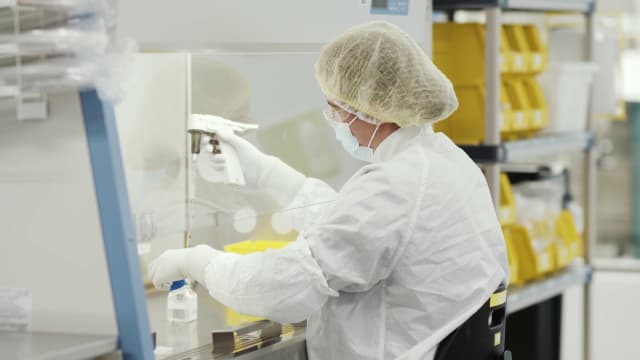 Vaccines moved a step closer towards helping end the pandemic, after a new jab was shown in early data to be almost 95% effective in protecting against Covid-19.

Scientists welcomed the “tremendously exciting” news that US firm Moderna’s jab may be highly effective in preventing people getting ill and may work across all age groups, including the elderly.

Health Secretary Matt Hancock told a Downing Street press conference “great advances in medical science are coming to the rescue” of countries battling the coronavirus pandemic, but admitted the UK had only secured five million doses of Moderna’s jab.

“While there is much uncertainty, we can see the candle of hope and we must do all that we can to nurture its flame,” he said.

“But we’re not there yet. Until the science can make us safe we must remain vigilant and keep following the rules that we know can keep this virus under control.”

The UK has already secured 40 million doses of a vaccine from Pfizer/BioNTech, which uses the same technology as Moderna and should be in the UK before Christmas.

But the Government did not place orders with Moderna at the same time.

It announced on Monday that it had ordered five million doses of the Moderna vaccine, with the option of further doses.

A Government spokesman said the jab would not become available until “spring 2021 in the UK at the earliest”.

Meanwhile, a vaccine from Oxford University and UK pharmaceutical giant AstraZeneca is due to report in the coming days or weeks. The UK has secured 100m doses of that vaccine.

Asked if he regretted not buying more from Moderna, Mr Hancock said he was “delighted” that the new vaccine had been added to the UK’s portfolio.

“It’s really good news that we’ve got some of the Moderna vaccine,” he said, but added that it did not come on stream until the spring and the UK had orders for others which could be in use earlier.

He hinted that Oxford and AstraZeneca’s vaccine would arrive before Moderna, saying: “If you take Pfizer plus AstraZeneca agreement, then between them we have over 100m doses on order.”

He told reporters: “Do I feel more encouraged in relation to another messenger RNA vaccine showing that it is making Covid-19 potentially in the future of vaccine preventable disease? Absolutely so.

He said “pretty much all the vaccines around the world that are in development” work on the coronavirus spike protein.

“This really does begin to show us that the spike protein is a completely plausible and effective target for vaccines to working against.

“When we started this journey in February-March we didn’t even know that. We are feeling in a happier place.”

Moderna intends to submit an application for an emergency use authorisation with the US Food and Drug Administration shortly and will submit further data on the vaccine’s effectiveness and safety.

The firm’s final-stage clinical trial is ongoing and includes more than 30,000 people in the US.

The early-stage, interim analysis included 95 participants with confirmed cases of Covid-19, of whom 90 had received the placebo and five the active vaccine.

The 95 cases included 15 older adults, aged 65 and over, as well as 20 people from black and minority ethnic backgrounds.

Severe cases of coronavirus were also examined, including 11 in the first interim analysis.

All 11 cases occurred in the placebo group and none in the group which had received the vaccine, known currently as mRNA-1273.

Moderna said its available data does not indicate any significant safety concerns.

However, the 94.5% efficacy from this analysis could drop as further results from the clinical trial are announced.

Dr Stephen Hoge, president of Moderna, said he “grinned ear to ear” when learning about the potential efficacy of the vaccine.

He told BBC News: “When we got the news from the data and safety monitoring board, I’ll admit I broke character and grinned ear to ear for a minute.

“Because I didn’t expect, I don’t think any of us really hoped, that the vaccine would be 94% effective at preventing Covid-19 disease, that was really a stunning realisation.”

He said combined with data suggesting it can stop severe Covid-19, it means “that the vaccine really is a terrific tool for stopping the pandemic and hopefully stopping the worst of the disease that people are facing”.

He added: “When you combine it with the news of last week of Pfizer’s vaccine, you’ve got now two vaccines that are over 90% effective.

“It really means I think we have the tools necessary to finally beat this virus back and I think that’s probably the best news of the day for all of us, is that there really are now solutions in our hands and we need to deliver them to the people who can use them.”

Dr Charlie Weller, head of vaccines at Wellcome, said:  “Hopes of ending this pandemic rest on having effective vaccines, treatments and tests.

“It is incredibly promising that the vaccines we urgently need are now on the horizon.

“To have multiple vaccine candidates with interim results that surpass our expectations is phenomenal, and testament to the incredible global research effort this year.”

Peter Openshaw, professor of experimental medicine at Imperial College London, said: “This news from Moderna is tremendously exciting and considerably boosts optimism that we will have a choice of good vaccines in the next few months.”

The Pfizer/BioNTech vaccine needs to be kept at minus 70C before being transferred to a fridge, which could pose transport and storage issues.

Stephen Evans, professor of pharmacoepidemiology at the London School of Hygiene and Tropical Medicine, said the news was “encouraging for other vaccines that may be expected to also have worthwhile efficacy.”

He added: “Although they reported efficacy being over 94%, there is statistical uncertainty in this, but based on these data, the likely efficacy will be better than 85% which would be greater than most scientists would have expected.”

President Ursula von der Leyen, head of the European Commission, said on Monday the EU had “concluded exploratory talks with Moderna” and “we hope to finalise the contract soon”.