Brexit talks will collapse without progress on fishing – Coveney 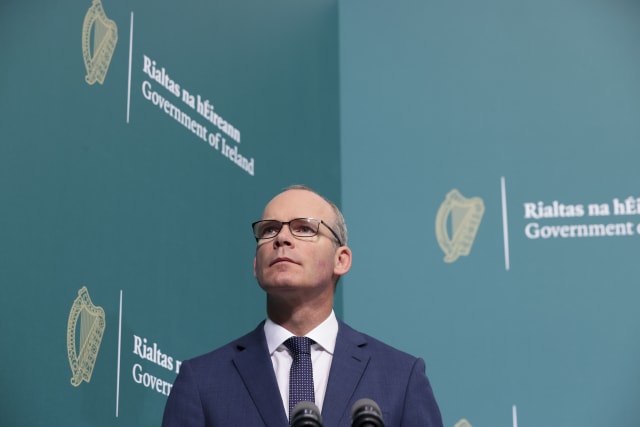 Ireland’s Foreign Affairs Minister has warned that talks on a Brexit trade deal will collapse if no progress is made on fishing.

Simon Coveney warned that negotiations on the issue are not in a good place and have not moved since the summer.

He said the UK was asking for more in return than access to British fishing waters was worth financially to the European Union.

Discussions between EU and UK negotiators were due to resume in Brussels on Monday, in what is being billed as a crucial week for talks.

But there remain serious gaps between the two sides on a number of issues.

Mr Coveney said: “What the British Government have promised to their fishing industry, versus what Michel Barnier’s negotiating mandate from the EU is, there’s a very, very wide gap.”

He added: “It’s not good. That’s the truth of it. These negotiations are not in a good place when it comes to fishing.

“There hasn’t been any success in closing the gap between the positions of either side.

“Until we can find a way of doing that, there isn’t going to be an agreement. We’re in the same place in fishing as we were in mid-summer.”

Mr Coveney said the UK was asking a lot more of the EU in return for access to its fishing waters.

He told RTE’s Morning Ireland: “What is at issue here is whether the EU fishing fleet will have an agreement that can allow them access into British waters to catch a certain amount of fish.

“But this is in the context of the UK looking for access into the EU energy market, which is worth more than the fishing issue financially.

Mr Coveney dismissed the recent turmoil in No 10, which saw the departures of two of Boris Johnson’s top advisers – Dominic Cummings and Lee Cain – as a “minor distraction”.

“From an EU perspective, we’ve always been focused on the issues, not the personalities,” he said.

“Even though the personalities that are advising the Prime Minster have now changed, the issues haven’t.”

The UK’s chief negotiator David Frost has warned that the UK will not change its red lines.

He tweeted: “We are working to get a deal, but the only one that’s possible is one that is compatible with our sovereignty and takes back control of our laws, our trade, and our waters.

“That has been our consistent position from the start and I will not be changing it.”

He added: “There has been some progress in a positive direction in recent days. We also now largely have common draft treaty texts, though significant elements are of course not yet agreed.

“We will work to build on these and get an overall agreement if we can.”

Mr Coveney said that the motivation to completing a deal is that the cost of failure is simply too high.