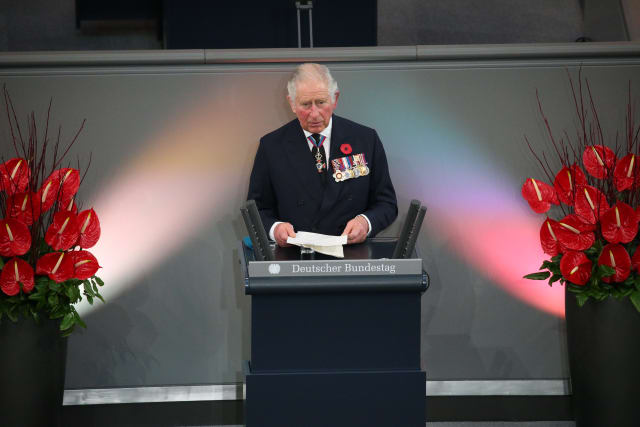 The Prince of Wales has delivered a passionate speech in praise of the bonds of friendship, culture and shared values he believes will endure between the UK and Germany in the aftermath of Brexit.

Charles’ comments, delivered during a Berlin ceremony marking Germany’s National Day of Mourning, were his most direct reference to Britain’s decision to leave the European Union (EU) to date.

The heir to the throne’s speech was made as the UK’s chief Brexit negotiator said a trade deal with the EU may not succeed, but he is still hopeful of a resolution as the talks go down to the wire this week.

Speaking in Germany’s parliament or Bundestag, the prince said politicians and officials may be negotiating the “shape” of Britain and Germany’s relationship but its “essence” was down to the “connection” between its people.

Charles echoed the famous words of poet John Donne when he said “no country is really an island” and told guests the destinies of the UK and Germany would remain “interdependent” to a “considerable degree”.

During the poignant national event – when all victims of war and tyranny are remembered – the prince told those gathered, including Germany’s president Frank-Walter Steinmeier: “The United Kingdom has chosen a future outside the European Union, and the relationship between our countries is evolving once again.

“Its shape is a matter negotiated between our governments and its essence is defined by the enduring connections between our people.

“It is, therefore, my heartfelt belief that the fundamental bond between us will remain strong: we will always be friends, partners and allies.

“As our countries begin this new chapter in our long history, let us reaffirm our bond for the years ahead.”

Charles had begun his speech by highlighting how he first visited Germany’s capital nearly 50 years ago and Berlin was a city “that embodies so much of the history of our continent, and all that we have been through”.

He added: “Berlin reminds us that the fortunes of all Europeans have been dependent on one another for centuries.

“The relationships we enjoy today are built on foundations dug deep in the bedrock of our common experience, anchored by bonds running North and South, East and West, through our diverse communities and across our borders.”