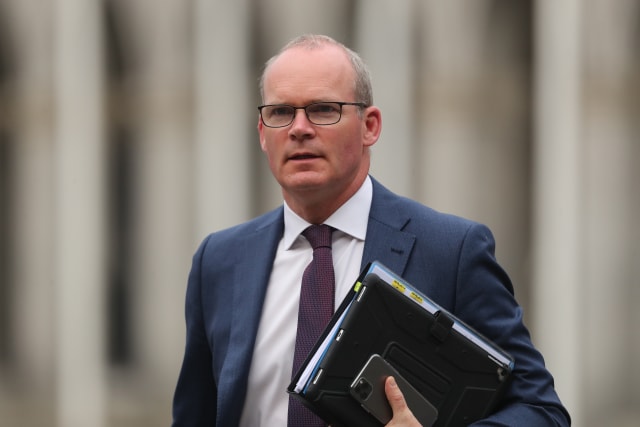 Irish Foreign Minister Simon Coveney has warned there will be no EU-UK trade agreement if Boris Johnson pushes ahead with legislation that would allow Britain to break international law.

As Brexit negotiations come down to the wire, Mr Coveney again expressed concern at the Internal Market Bill being championed by the Prime Minister in Parliament.

Downing Street has insisted it will press on in the Commons with elements of the proposed legislation that would allow the Government to break international law despite the House of Lords voting against them in recent days.

The move comes as London and Brussels are set to continue talks this week ahead of the Brexit transition period coming to a close at the end of the year.

Mr Coveney, who said things need to "move" this week, told Sky News: "Even if we do get a new trade deal negotiated by both sides, if the British Government is determined to continue with their Internal Market Bill – to reintroduce parts of that Bill that were removed by the House of Lords this week – then, I think this is a deal that won't be ratified by the EU.

"Because there is no way the EU will agree to ratify a new agreement if the British Government is breaking the existing agreement that is not even 12 months old, and breaking international law by doing that."

Mr Coveney also called for a cooling of rhetoric in trade talks, especially in the contentious area of fishing rights.

He said: "We really have to try and find a way of coming up with a compromise on fish that both sides can live with.

"And we need to try and dial down the language on this because it is very easy to become emotive."

He said: "I think I would sum it up by saying this is very difficult, but, it's also very doable.

"And I think the consequences of not getting a trade deal and a future relationship deal... before the end of the year, I think is very significant."

Environment Secretary George Eustice said next week is "a week when things need to move" for the UK and EU to agree to a trade deal.

He said: "Both sides recognise that time is very, very short. It's not long ago we were saying we needed to get some kind of conclusion by the middle of October.

"People have persevered with these talks. There does come a point frankly where businesses need to know what they are preparing for."

He added: "You can always squeeze out extra time if you need to, if you're nearly there.

"But, I agree with Simon Coveney, perhaps we can agree on this much... this needs to be a week when things move, when we break through some of these difficult issues and get resolution and at least have some sort of headlines – if you like – of an agreement.

"Otherwise, it gets quite difficult and we do start to run out of time to implement it."