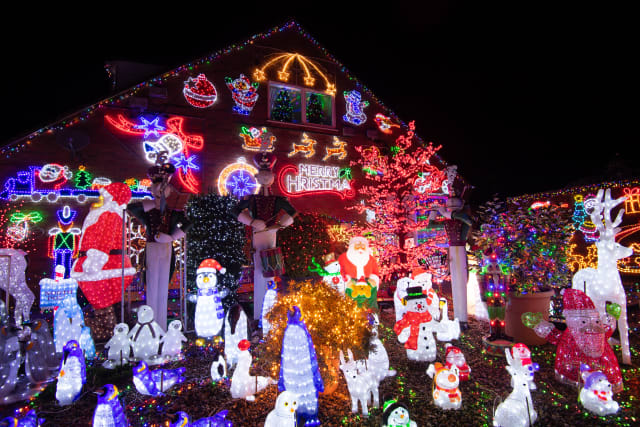 People around the country have switched on their incredible Christmas light displays to bring some early festive cheer.

A retired couple “plodded on” through the coronavirus pandemic to decorate their home in Cambridgeshire with hundreds of festive lights.

Helen and John Attlesey have decorated their house in Soham every year for almost a decade to raise money for three charities that helped their grandson Jacob recover from a serious form of epilepsy.

The couple, who began putting up lights at the beginning of September, said they worked through the coronavirus pandemic to ensure their display was ready to be switched on last week.

Among the decorations are colourful silhouettes, an inflatable Father Christmas and light-up reindeer. They also decorate several trees outside.

Asked how many decorations are put on the house, Mrs Attlesey told the PA news agency “too many to count – hundreds”.

Mrs Attlesey said: “We started with a few lights nine years ago and every year we’ve added more and more.

“People come from all over to admire the display, they love it, it makes them happy, it’s really become a tradition.

“But it is a shame that this year we had to switch on the lights without a gathering to watch, as we’ve done in the past, but we just plodded on through to make sure we could bring a smile to some faces.”

The grandmother added: “I’d like to thank everyone who has donated and I hope everyone enjoys the display.

“It’s just our way of giving back to those who saved our grandson.”

The lights will be kept on until the new year.

In Doncaster, South Yorkshire, Paul Fenning, 30, a manager of a gas metre company, themed his decorations around classic seasonal stories The Grinch and The Nightmare Before Christmas.

Mr Fenning, who says his collection of decorations is worth hundreds of pounds, said he put the display up early to “bring some joy” to those affected by the pandemic.

Among the display are three Christmas trees, models of Jack Skellington and the Grinch and a large nutcracker.

He told PA: “I felt I had to get it up early to bring some joy while we’re all stuck in lockdown. Families love to see everything, it’s like a mini winter wonderland.

“It took about a week to put up, using decorations that look expensive but are all bought fairly cheaply.

“Most people are mad about the Grinch theme which is massive this year, and we’ve also got great love for the traditional green and red colours.”