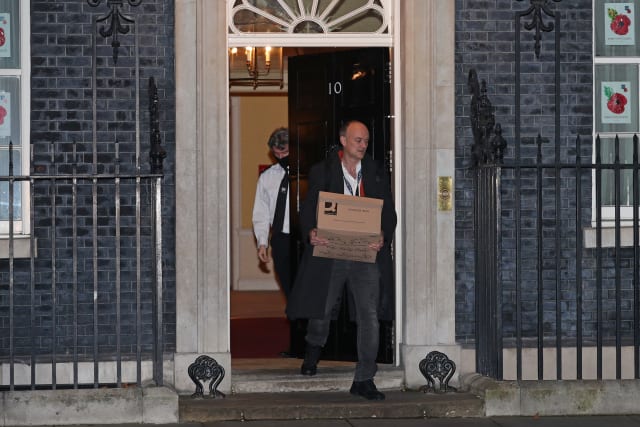 A Cabinet minister has branded events surrounding the dramatic departure from Downing Street of Boris Johnson’s senior aide as “an episode” in the Prime Minister’s time at Number 10.

Environment Secretary George Eustice insisted the sudden exit of Dominic Cummings would also have no impact on crucial Brexit negotiations.

Mr Eustice told Times Radio: “It’s also the case – and this is no secret – that when you’re in more steady-state times and you need to build alliances, build relations with others, well that’s less Dominic’s forte and I think he would say that himself.

“Dominic Cummings is a force of nature. He will do his own thing, I’m sure. But look, as far as we’re concerned, there’s obviously been an episode.

“He’s chosen to leave. I’ve no reason to suspect he’ll be writing a blog.”

Mr Eustice said Mr Cummings “tends to apply himself in short bursts”, adding that it is up to the Prime Minister who will be among his key advisors.

He told Sky News: “I’ve known Dominic Cummings myself for many years. He’s got many great strengths and one of them is winning campaigns.

“And he tends to apply himself in short bursts, short tours of duty, on big strategic changes such as the 2016 referendum result, such as the 2019 general election.

“And he’s very talented at that. But it’s always the Prime Minister’s prerogative who will be their key advisors.”

Mr Eustice insisted talks with the EU on a future trade deal would not be affected by the departure.

“The negotiations have been led by David Frost from the beginning. He’s got a very talented, experienced team of technical experts around him.

“He’s led these negotiations from the start and obviously remains in place and continues to do so.

“So I don’t actually think the departure of Dominic Cummings makes any impact on the negotiations, since Lord Frost has been leading those.”

Mr Johnson is understood to be now aiming to reassert control over his Government by meeting with concerned Conservatives.

The Sunday Times reported the PM will “attempt to get his premiership back on track” by establishing a policy board that will appeal to northern working-class voters who helped Mr Johnson win his majority in last year’s general election.

The paper said the group will be chaired by Harborough, Oadby and Wigston MP Neil O’Brien, who helped former chancellor George Osborne devise the Northern Powerhouse, and added that Mr Johnson is expected to meet the Northern Research Group of MPs on Monday to listen to their concerns.

It comes after leading Tory MPs urged the PM to use the change of personnel to “reset the Government” following complaints the party and Parliament were not being heard during the time Mr Cummings held sway.

According to reports, tensions were heightened in Downing Street last week when the Prime Minister was shown “hostile texts” briefing against his fiancee Carrie Symonds, which had been forwarded to her.

Mr Cain, a veteran of the Vote Leave campaign with Mr Cummings, had been on the verge of being named Downing Street chief of staff before his resignation.

Sir Edward Lister was announced as the interim chief of staff pending a permanent appointment, with the Times reporting chief Brexit negotiator Lord Frost, Lord True and Lord Bridges of Headley are being considered for the role.

The dramatic events came as Brexit heads into a crucial phase next week, with the UK team of negotiators running out of time to seek a trade deal with Brussels before the end of the transition period on December 31.

The Prime Minister’s official spokesman, James Slack, who will succeed Mr Cain as director of communications in the new year, has insisted Mr Johnson was not being distracted by the row over his staff.