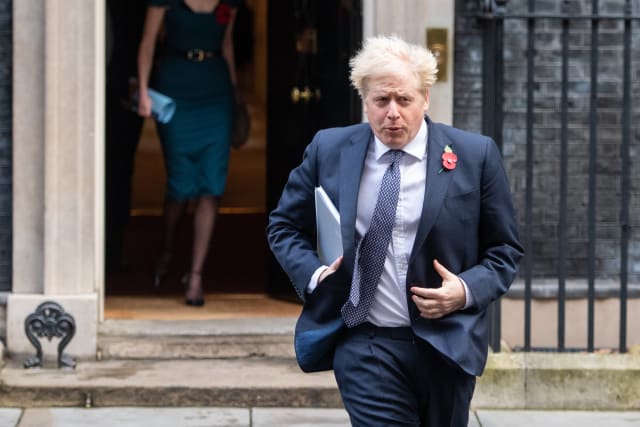 Senior Tories have called for Boris Johnson to get a grip on Downing Street after a power struggle saw two close aides of the Prime Minister leave his administration.

Chief adviser Dominic Cummings exited Number 10 after his relationship with Mr Johnson “fell off a cliff”, according to a former senior Cabinet minister.

Mr Cummings left Downing Street amid claims he had briefed against Mr Johnson and the Prime Minister’s fiancee Carrie Symonds.

Leading Tory MPs have urged the Prime Minister to use the change of personnel to “reset the Government” following complaints the party and Parliament were not being heard during the time Mr Cummings held sway.

Mr Johnson is set to embark on a major effort to shore-up relations with Tory backbenchers, reports suggest.

According to the Daily Mail, tensions were heightened in Downing Street when the Prime Minister was shown “hostile texts” briefing against Ms Symonds, which had been forwarded to her.

Former Brexit secretary David Davis told the BBC many within No 10 had “turned on” Mr Cummings.

He said: “It is said … people ranging from Allegra (Stratton) – the new spokesman for the Prime Minister – right through to his (Mr Johnson’s) fiancee, Carrie, turned against him.

“The relationship with the Prime Minister fell off a cliff. And once that’s gone, it’s gone.”

Mr Davis, who was allegedly described as “thick as mince” and “lazy as a toad” by Mr Cummings when in the Cabinet in 2017, also branded the adviser’s style “confrontational” but added the PM had “relied on him” and “there are things he (Mr Cummings) was right about”.

On what could change, Mr Davis said: “Well the first thing is there are going to be some new staff in Number 10. He’s going to need a new chief of staff who has got to be fiercely efficient but not fiercely political. He’s got to find someone who doesn’t have their own agenda.

Referring to the Prime Minister, Lord Barwell said: “It feels to me that there’s an opportunity here for him to get his Downing Street operation more harmonious and more effective.

“To rebuild relations with Conservative MPs, the parliamentary party.

“And, perhaps, to set a less confrontational and more unifying tone, that is maybe more in tune with his natural instincts.”

He told Times Radio: “I consider that he’s created mayhem in government.

“The whole of his period in government has been marked by a slide in standards so that the Number 10 press office has been used as a vehicle for distributing smears, untruths and lies which was very obvious in the autumn of last year and the period around prorogation and the run up to the general election.

“This year it’s difficult not to say that he’s created nothing except chaos with the Prime Minister.

“Whether it’s the handling of Covid and his own behaviour, whether it’s the Internal Markets Bill because quite apart from being utterly wrong in violating international law, that has blown up in the face of the Government and led to a massive rebellion in the Commons and the House of Lords and something of a crisis associated with that.”

The PA news agency understands he and Mr Cain will still be employed until the middle of next month, with other reports suggesting Mr Cummings will work from home on projects such as mass testing.

Sir Edward Lister was announced as the interim chief of staff pending a permanent appointment.

The dramatic events have come as Brexit heads to a crucial phase next week, as London seeks a trade deal with Brussels before the end of the transition period on December 31.

The Prime Minister’s official spokesman, James Slack, insisted Mr Johnson was not being distracted by the row.