Happy Monday as Manchester celebrates fall of its ‘Berlin Wall’ 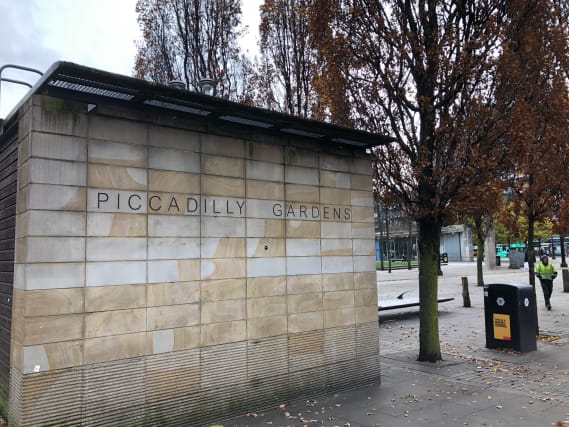 It has been called the “square that shames a city” and likened to a horror movie scene, but after years of complaints the builders are finally moving in on Manchester’s biggest civic square.

Piccadilly Gardens in the heart of the city will see council workmen start a makeover on Monday after possibly one of Britain’s most maligned attempts at urban planning in recent years.

In a bold move, Manchester City Council is to demolish a small section of the structure, the first part of a revamp for the area, which has become a magnet for crime, drugs and violence.

Reconfigured in 2002 as part of the city’s Commonwealth Games bid, the city employed one of the world’s pre-eminent architects, Japan’s Tadao Ando, feted by architectural critics and theorists for his minimalist work.

Manchester believed it was gaining a stylish new landmark, signifying the modernist, soaring future for a place that thinks of itself as the nation’s second city.

“What a sh*t hole…” begins the latest review of the area on Tripadvisor, among a sea of negative comments, with others warning: “Very unsafe and ugly place with concrete everywhere.”

Mark and Alison Hagon, from Chorlton, south Manchester, stood beside the wall on a windswept day in Piccadilly Gardens this week.

Mr Hagon said: “Oh, disgusting – we were saying before, when they put it up, we couldn’t quite believe what a horrible thing they’ve made of it because, you know, Piccadilly Gardens used to be so beautiful.

“It had manicured gardens, the little sunken gardens, it was a beautiful, green and colourful spot.

“To kind of replace it with these concrete structures, grey, colourless, and puts everything in shadow.

“Something uplifting for the people who live here, not greyness and darkness and shadow.

“I cannot imagine anyone being disappointed. I can’t imagine a single person being upset that that (the wall) comes down.

“If you are going to invest in something in the city centre, let it be something beautiful.”

Mrs Hagon added: “There’s going to be no grief is there? Something to be proud of in Manchester, a kind of centrepiece, that’s what we kind of need, somewhere where people and families can sit and enjoy.”

Once lovingly painted by LS Lowry, the area by the mainline railway station is the public face of Manchester greeting thousands of visitors heading into the city centre.

Manchester City Council said the initial £2 million public works is merely the first stage in a £10 million major overhaul, but the larger part of the structure, attached to a privately-owned pavilion building, will remain for now.

But not even the Labour-run administration that commissioned, paid for and built the wall will be sorry to see it go.

Councillor Pat Karney, city centre spokesman, said: “This is the news that everybody in Manchester has been waiting for – part of the wall is coming down. I’m going to mark it on my calendar.”