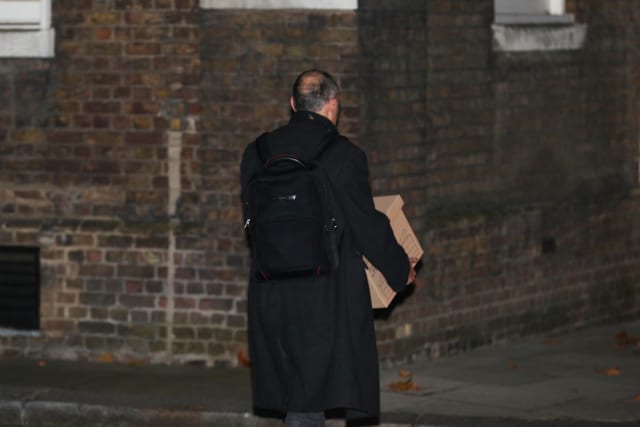 Mr Cummings was seen leaving No 10 carrying a box on Friday evening.

Dominic Cummings says he always intended to depart at the end of the year, and had forecast such a plan in a blog he wrote in January, but all the signs are his timing has changed after losing out in a power struggle among the Prime Minister’s inner circle.

He is thought to have wanted his close ally Lee Cain – the No 10 director of communications – to be installed as Mr Johnson’s chief of staff.

But the proposed move infuriated many senior Tories – and, it is said, the Prime Minister’s fiancee Carrie Symonds – who were alarmed at the prospect of Mr Cummings extending his influence.

When this failed to work, Mr Cain – who feared he was being sidelined with the appointment of Allegra Stratton as the new press secretary – announced he was quitting.

– What did Mr Cummings do?

Mr Cummings says reports he threatened to resign on the spot are an “invention”, but he was clearly very unhappy at what happened.

Within a little over 24 hours he was telling the BBC he would be going at the end of this year.

He said his “position hasn’t changed since my January blog” in which he said he hoped to be “largely redundant” by 2021.

The PA news agency understands both he and Mr Cain, who resigned as communications chief, will still be employed until the middle of December, although reports suggested Mr Cummings would be working from home.

– Why are people making such a fuss over an adviser leaving?

Mr Cummings was regarded as being more powerful than most ministers, exerting control over the Government’s agenda and demanding iron discipline from the army of Whitehall special advisers.

As Vote Leave campaign director he is regarded as the mastermind behind the 2016 Brexit referendum result and is credited with playing a key role in last year’s general election victory.

But his abrasive manner and open contempt for MPs and officials earned him many enemies in Westminster, who will not be sorry to see him go.

– What effect will his departure have?

It is not clear – although some at Westminster are predicting it will lead to a less confrontational style of government with a greater focus on issues such as climate change and building bridges with the devolved administrations.

Unhappy Tory MPs, who have felt ignored by No 10 since the election, will hope Downing Street will begin including them.

Others expect there will be less inclination on the part of the Government to pick fights across a range of institutions – from the BBC and the wider media to the judiciary.

Whether it works out that way remains to be seen.