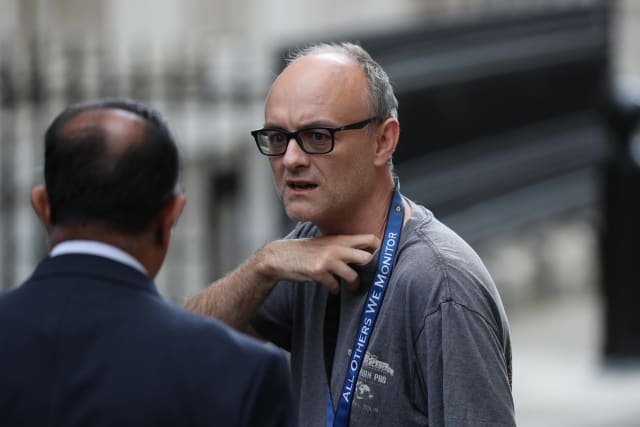 Conservative MPs have welcomed Dominic Cummings’ departure as Boris Johnson’s chief adviser amid a bitter power struggle in No 10 as a good opportunity for a “reset”.

The Prime Minister’s controversial aide is expected to leave his role by the end of the year, following the resignation of his fellow Vote Leave veteran Lee Cain as communications chief.

Mr Cummings insisted to the BBC that “rumours of me threatening to resign are invented” after it was suggested he would exit in protest over the treatment of his ally.

But Mr Cummings said his “position hasn’t changed since my January blog” in which he said he hoped to be “largely redundant” by 2021.

Tory backbenchers urged No 10 to use the exit of the aide whose mid-lockdown trip to Durham cemented his notoriety as an opportunity to restore the values of “respect, integrity and trust”.

Senior Tory MP Sir Bernard Jenkin said it is time to restore “respect, integrity and trust”, which he said have been “lacking in recent months” between No 10 and Tory MPs.

“It’s an opportunity to reset how the Government operates and to emphasise some values about what we want to project as a Conservative Party in Government,” the chair of the Commons liaison committee told BBC Radio 4’s Today programme.

“I’m not surprised in a way that it is ending in the way it is. No prime minister can afford a single adviser to become a running story, dominating his Government’s communications and crowding out the proper messages the Government wants to convey.

“Clearly there are concerns about the dismissive attitude sometimes shown by Lee Cain and Dominic Cummings towards people in Government and MPs on the backbenches,” she told the PA news agency.

“This is an opportunity to move on from that and to have a more collaborative approach.”

Downing Street declined to comment further on Mr Cummings’ plans to leave, refusing to say whether he had formally handed in his notice, or if an exit date had been set.

Transport Secretary Grant Shapps argued that Mr Cummings was ready to quit because his big projects of mass coronavirus testing and Brexit are “on the near-term horizon now”.

“He will be missed but then again we’re moving into a different phase,” the Transport Secretary told Sky News, adding that “advisers do come and go”.

One of the most controversial figures in No 10, news of his departure came with the BBC quoting a Downing Street source saying he would be “out of Government” by Christmas.

Highly-publicised in-fighting at the heart of Government led to Mr Cain’s resignation on Wednesday.

He had been offered the post of chief of staff but a backlash among Tories and Mr Johnson’s inner circle sealed his departure.

Shadow health secretary Jonathan Ashworth highlighted the strain being heaped on the NHS and the public by Covid-19 while “Downing Street is paralysed by the soap opera of these self-indulgent spin doctors,” adding: “It’s pathetic.”

His colleague on the Labour front-bench, David Lammy, said the departures are “like rats fleeing a sinking ship”.

“His legacy is one of bullying, deception, hypocrisy and hubris. The super-forecaster who ignored the pandemic. His damage is irreparable,” he added.

The Prime Minister’s official spokesman, James Slack, who will replace Mr Cain when he leaves in the new year, continued to insist that Mr Johnson is not being distracted from the national crisis by the row.

“What the Prime Minister and the Government are focused upon is taking every possible step to get this country through the coronavirus pandemic,” he said.