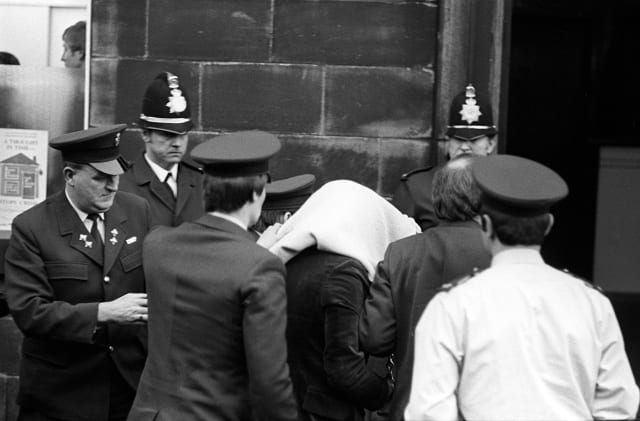 A chief constable has issued a "heart-felt" apology to relatives of the Yorkshire Ripper's victims after the serial killer's death in hospital.

Peter Sutcliffe, once one of the most feared criminals in the country, died aged 74 after reportedly refusing treatment for coronavirus.

His killing spree across Yorkshire and Manchester from 1975 to 1980 terrified Northern England and launched a huge manhunt and a botched police inquiry.

Sutcliffe was serving a whole life term for the murders of 13 women, some of whom were sex workers, and the attempted murder of seven more.

He was an inmate of the maximum security Frankland jail and died on Friday morning at the nearby University Hospital of North Durham.

Richard McCann was five when his mother Wilma was murdered in Leeds in 1975.

He said that when 16-year-old Jayne MacDonald was killed in 1977, officers referred to her as the first "innocent" victim.

He told Sky News: "My mum was completely innocent and deserved to live."

That led West Yorkshire Police chief constable John Robins to offer what he said was a "heartfelt apology", saying the language used by senior officers at the time caused families "additional distress and anxiety".

"Such language and attitudes may have reflected wider societal attitudes of the day, but it was as wrong then as it is now," he said.

Mr Robins said the huge efforts by the team to catch the Ripper had been overshadowed by the language senior officers used, but stressed that attitudes had changed.

During the Ripper's 1981 trial at the Old Bailey, Sir Michael Havers, the Attorney-General who was prosecuting, said of the victims: "Some were prostitutes, but perhaps the saddest part of the case is that some were not.

"The last six attacks were on totally respectable women."

Current serving police officers said Sutcliffe was a "monster" who should "rot in hell" after hearing he had died.

Brian Booth, chairman of West Yorkshire Police Federation, said: "He is the very reason most people step to the plate and become police officers – to protect our communities from people like him."

Former detective Bob Bridgestock said he was one of the first on the scene when Josephine Whitaker was murdered in 1979.

"It fits, in my mind, into the likes of (Myra) Hindley and (Ian) Brady and the likes of Robert Black – serial killers who will be detested way after they've gone."

He said senior detectives "wore blinkers" while leading the cumbersome inquiry, which got side-tracked by a cruel hoaxer.

One of his surviving victims said she was still suffering from the effects of his attack in Leeds, 44 years on.

Marcella Claxton told Sky News: "I have to live with my injuries, 54 stitches in my head, back and front, plus I lost a baby, I was four months pregnant.

"I still get headaches, dizzy spells and blackouts."

The Prime Minister's official spokesman said Sutcliffe was "depraved" and it was right that he had died behind bars.

He tweeted: "The 13 women he murdered and the 7 who survived his brutal attacks are in my thoughts."

Lot's of breaking news about the death of convicted murderer Peter Sutcliffe. I understand why this is news worthy, but my ask of the media is lets show the faces of those he killed, not him. The 13 women he murdered and the 7 who survived his brutal attacks are in my thoughts. pic.twitter.com/bDe3gtpmkj

Born in Bingley, West Yorkshire, in 1946, Sutcliffe left school aged 15 and worked in menial jobs before becoming a grave digger.

He began his killing spree in 1975 and avoided detection for years due to a series of missed opportunities by police to snare him.

He eventually confessed in 1981 after he was caught in Sheffield.

Despite his 24-hour-long confession to the killings, Sutcliffe denied the murders when he appeared in court.

He was jailed for 20 life terms at the Old Bailey, with the judge recommending a minimum sentence of 30 years.

He was transferred from Parkhurst prison on the Isle of Wight to Broadmoor secure hospital in Berkshire in 1984, after he was diagnosed with paranoid schizophrenia.

In 2010, he was told he would never be released, and was later deemed fit enough to be treated as an inmate and was returned to maximum security prison.

More than two decades later, a secret report disclosed that Sutcliffe probably committed more crimes than the 13 murders and seven attempted murders for which he was convicted.