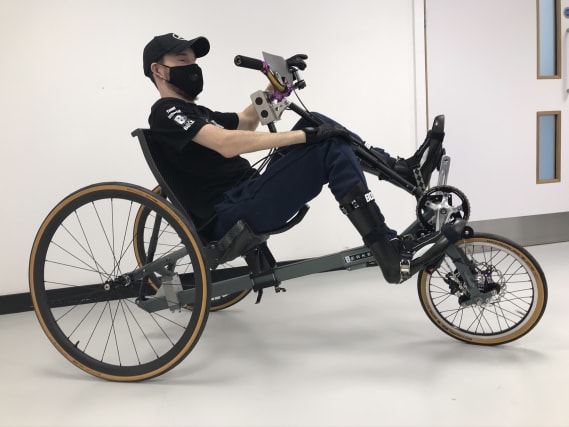 A paralysed British athlete set to take part in a global cycling race hopes victory can shine a light on the life-changing technology that allows him to compete.

Johnny Beer is supported by the Mercedes F1 team and hopes to raise £1 million to support advancements in electronic remedies for those with spinal injuries.

The 25-year-old from Aylesbury, Buckinghamshire, was paralysed from the chest down in a trampolining accident in 2011.

The bike co-ordinates shocks from electrodes attached to his skin to stimulate his muscles, which in turn work the bike’s pedals.

A commercial FES bike was released in 2017, but Mr Beer has refined the technology with carbon fibre cycling boots and a seat moulded to his shape.

“I can’t actually feel my legs, so I don’t have the sensation of the electric stimulation,” Mr Beer told the PA news agency.

“But it’s an experience I felt when I was able-bodied that I can’t really get any other way.

“Pushing a wheelchair is something I don’t really enjoy very much; it’s slow, it’s uncomfortable.

“Riding an FES bike I actually feel the benefits of it afterwards and during. It’s something I can’t really describe, it just feels good.”

A chance meeting with chief aerodynamicist Eric Blandin during a tour of the Mercedes F1 factory in Brackley, Northamptonshire, led to them working together, with engineers applying their racing knowledge to specialist parts for the bike.

Also known as BionicBeer, Mr Beer has forged an impressive FES cycling career, earning a silver medal at Cybathlon 2016 and winning the Cyberbike 2018 against others with similar conditions.

On Friday he competes in Cybathlon 2020, which is taking place remotely due to the coronavirus lockdown.

Contestants’ races were individually pre-recorded before a collective viewing at 5pm to discover the winners.

Although not allowed to reveal his time, Mr Beer said: “It’s the best time I’ve ever got so I’m feeling confident.”

Mr Beer has set up a JustGiving page to raise money for the Neurokinex Spinal Stimulation research programme – who have helped him with his training.

He believes Neurokinex’s ground-breaking work in reconnecting damaged nerves with electric stimulation could be the future for those with spinal cord injuries.

“I think spinal cord damage can be rejuvenated… I’m expecting within the next four years for there to be a major advancement in recovery… we’re getting closer,” Mr Beer said.

“There are many different avenues but personally, the area of stimulating the spinal cord with electricity seems to be a very good non-invasive technique of recovery.”

Mr Beer’s biggest competitor at Cybathlon 2020 is Mark Muhn, from California, who uses surgically implanted electrodes as opposed to adhesive ones.

Graham Miller, director of applied science at Mercedes F1, said: “Working with Johnny has been both rewarding and a real technical challenge for our team, applying their F1 knowledge to new areas.

“His spirit, commitment and dedication to helping others are fantastic, and everyone at Mercedes F1 hopes Johnny has a great race.”

If you would like to donate to Mr Beer’s cause go to: justgiving.com/spinalstimresearch