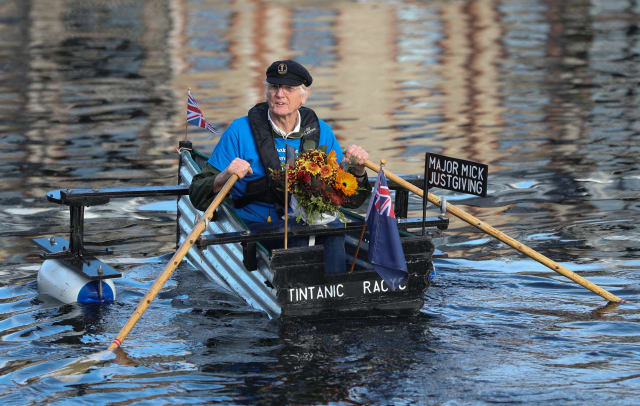 An 80-year-old retired Army major has celebrated his 50th wedding anniversary by rowing down a canal to his wife, presenting her with flowers and cutting a cake with an antique sword.

Mr Stanley, who served in The Royal Scots Dragoon Guards for 35 years, arrived in Chichester, West Sussex, on Friday morning aboard his faithful vessel the Tintanic.

He told the PA news agency: “The rain stopped and the sun’s come out now. It’s been a happy day.

“I arrived at the Chichester basin with a bunch of flowers for my wife which I gave to her, and I have now just had a cutting of the cake.

“A friend of my daughter has made a fantastic cake which I cut with a sword.”

The ceremonial sword – an antique from his regiment dating back to 1903 – served as an admirable tool for the cake-cutting.

Mr Stanley chuckled when asked if he took it in the boat with him, and said his wife Sally had instead brought it in the car.

He added: “I wouldn’t want to upturn in the boat with a sword in it.”

He and his wife celebrate their golden wedding anniversary on Saturday.

Mr Stanley has now completed about 70 miles of his challenge and raised nearly £30,000 for St Wilfrid’s Hospice in Bosham.

Inspired by a trip to India, he fashioned the Tintanic out of two sheets of corrugated iron, curtain hooks and hosepipe.

He said of his adventure so far: “I am lucky I haven’t got any blisters on my hands and my muscles seem to have adapted to it.

“I am enjoying the fun of doing it and everyone’s very supportive and nice.”

Rowing along the canal at 2mph allows him to chat with walkers on the banks, many of whom have praised his efforts.

“The teenagers came and called me cool, which I do take in,” he said.

“If a teenager calls you cool then you are doing the right thing.”

Asked how much he is aiming to raise for the hospice he said: “I am being greedy but £100,000 would be fantastic.

“I hope to come into Chichester Marina on December 18 and I am hoping there will be a large glass of Champagne for me.”

Donations can be made at www.justgiving.com/fundraising/majormicktintanic100challenge.