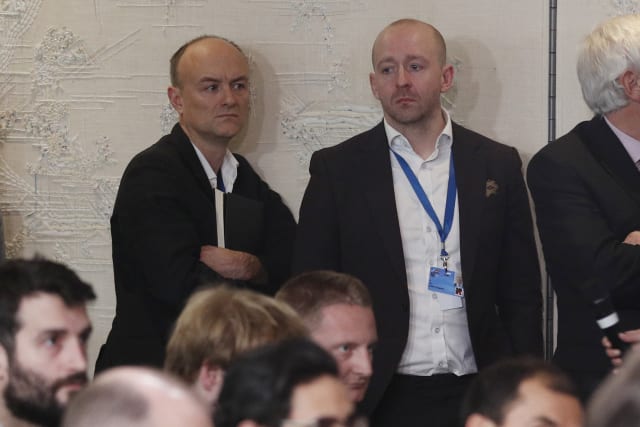 Two of the Prime Minister’s top aides, Dominic Cummings and Lee Cain, are leaving their jobs at Downing Street amid bitter in-fighting at Number 10.

Sources say the pair will continue to work from home until the middle of next month after an explosive week of revelations.

Chief adviser Mr Cummings and head of communications Mr Cain are close political allies, having worked together since the Brexit campaign before heading into Number 10 when Boris Johnson became PM in 2019.

Here is a rundown of their work across Westminster and with the Prime Minister:

Mr Cummings was appointed director of the successful Vote Leave camp during the 2016 EU referendum.

In a campaign that would later be dramatised by Channel 4, Mr Cummings controversially ordered the campaign bus to be emblazoned with the disputed claim that leaving the EU would save £350 million a week to spend on the NHS.

He was also credited with creating the “Take Back Control” motto which was seen to capture the mood of disillusionment which helped drive the Brexit vote.

The online advertising blitz highlighting the idea of a potential influx of migrants from Turkey if Britain remained in the EU – even though there was no immediate prospect of the nation joining the bloc – was also Mr Cummings’ responsibility.

Throughout the campaign, Mr Cummings worked closely with former journalist Mr Cain who was also on the Vote Leave team.

Following the referendum and Theresa May’s appointment as Prime Minister, Mr Cain joined Boris Johnson as one of his advisers at the Foreign Office when he was given the job of Foreign Secretary.

Boris Johnson took Mr Cummings into Number 10 to head up his operation after he won the Conservative top job in summer 2019.

Mr Cummings wrote on his blog of wanting to become “much less important – and within a year largely redundant” in the Downing Street operation.

There was a public outcry after details of Mr Cummings’ trip to Durham with his family at the height of lockdown were revealed, seemingly in a high-profile breach of the rules.

Despite calls for the aide to resign over the journey – which apparently included a trip to local beauty spot Barnard Castle to check the quality of his eyesight – Mr Cummings was backed by the Prime Minister, and a rare press conference in the Downing Street Rose Garden was held to address the matter.

The Lancet published a paper by University College London in August looking at the so-called Cummings effect, finding a “clear decrease in confidence starting on 22 May (when the story of his trip broke) and continuing to fall quickly in the days following”.

A bitter power struggle in Number 10 led to the resignation of Mr Cain.

He had been offered the post of chief of staff but a backlash among Tories and Mr Johnson’s inner circle ultimately led him to announce his departure from Number 10 rather than a promotion.

Mr Cummings quickly followed suit, initially indicating that he would stay in post until the end of the year, but then walking out of the famous black door with his boxes seemingly packed.