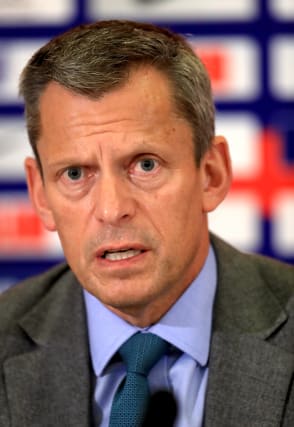 The ex-chief executive of the Football Association has won a High Court judgment against a disgruntled former Fulham FC executive who accused him of corruption on Twitter.

Craig Kline, previously a director of football at the Cottagers, made a string of claims against Martin Glenn after quitting the club in December 2017.

Some of Mr Kline’s allegations against Mr Glenn related to the decision by American billionaire Shahid Khan to withdraw his £600 million offer to buy Wembley Stadium.

He further alleged Mr Glenn – who has since been made chairman of the Football Foundation charity – was instrumental in covering up corruption, child abuse and fraud at Fulham between 2014 and 2017.

The allegations prompted the FA to launch an investigation, which reported in December 2018 that it found no evidence of any wrongdoing.

It also found Mr Kline himself had produced no evidence to support his allegations.

At a remote High Court hearing on Friday, Mr Justice Nicklin refused Mr Kline’s application for an adjournment of the hearing and said he would deliver “judgment in default” in favour of Mr Glenn because Mr Klein had not filed a defence.

Mr Kline described himself as a “whistleblower” but admitted failing to read all the documents served on him by Mr Glenn’s legal team, and failing to prepare a defence himself.

Mr Kline said he had stopped making allegations about Mr Glenn on social media, but said he refused to retract his comments.

“What they are requesting me to do is pay some money and potentially they want to put some words in my mouth taking back my allegations, only I don’t want to take them back,” he said.

He repeated his claims about witnessing cover-ups of child sex abuse, racism and organised crime while working at Fulham FC.

Alexandra Marzec, for Mr Glenn, said Mr Kline had more than 1,700 followers on Twitter including several journalists and MPs.

“This is because he has sought to present himself as a football insider and he trades on his status as a former football executive,” she said.

“It is a recurring theme in his tweets and as a result of that his allegations have been taken seriously.

“A number of organisations and individuals have contacted my client to look into these allegations including quite recently, for all of these reasons we say this case is a very strong case of defamation.”

Ms Marzec said: “This (sum) is not in reference to the gravity of the threats, it simply indicates that my client’s first aim is for the allegations to stop – the damages are very much subsidiary but they will be important by way of vindication.”

She added Mr Glenn had allowed Mr Kline’s claims to go unchallenged for some time in the hope he would stop, but said the court should be in no doubt the allegations had “taken its toll” on him.

Mr Kline was given seven days to agree to undertaking not to make further defamatory claims about Mr Glenn, or his lawyers will ask the court for an injunction.