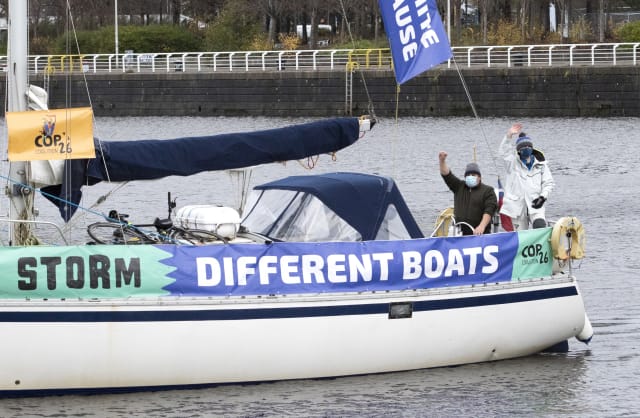 Environmental activists have sailed a boat into Glasgow to call for action on climate change as part of a weekend of events marking the delayed COP26 summit.

The United Nations summit was due to take place in Glasgow this month but has been postponed until November next year as a result of the global coronavirus crisis.

Activists staged a protest outside Glasgow Science Centre on Friday and welcomed the boat as it sailed up the River Clyde after setting off from Fairlie in North Ayrshire.

They carried signs with messages such as “The End if Nigh”, “Climate Justice, Just Transition, an End to Indecision” and “Climate Struggle = Class Struggle”.

Protesters chanted “What do we want? Climate justice. When do we want it? Now” as they welcomed the boat, named Saorsa, which was emblazoned with a banner stating “Same Storm. Different Boats.”

The event launched From The Ground Up: Global Gathering For Climate Justice, a weekend of online events organised by the COP26 Coalition with the aim of giving a platform to activists from across the world.

Quan Nguyen, an organiser of the From The Ground Up Gathering, said: “We may all be in the same storm but we are patently not in the same boat.

“As we face a multitude of colliding crises – Covid-19, the incoming recession, climate breakdown, racism, hunger, poverty, the mass displacement of peoples – this gathering will bring together grassroots movements who are speaking truth to power around the world.

“The COP26 Coalition recognises that these crises have common roots that see the Earth’s resources exploited for the benefit of the few at the cost of the many.

“We urge everyone to join us in organising against these root causes in the lead up to the UN climate negotiations in Glasgow 2021.”

Scott Tully from Glasgow Calls Out Polluters was among those at the protest on Friday.

He said: “There’s about a year to go until the UN climate talks come to Glasgow, one of the most important climate talks of all time and we don’t see any really significant action from the UK Government as of yet, the host nation of this very important event, so we are here to put pressure on the UK Government to say that what has happened so far is not good enough and to stand in solidarity with those across the world, particularly those on the front line, who have done little to cause this crisis.”

From The Ground Up runs until November 16 with more than 50 events, webinars, panels, workshops and roundtables organised in collaboration with hundreds of activist groups, charities and social change organisations from across the world.

Annie Lane, from Extinction Rebellion University of Glasgow, said: “While the UK Government attempts to paint themselves in a green light with weak action on the climate crisis which continues to put those least responsible for these crises in harm’s way, we are taking action to highlight that the converging crises of Covid, climate breakdown, unemployment and racism we face need solutions which address the root causes.”

The COP26 Coalition is a civil society coalition made up of groups and individuals from across Scotland and the UK.