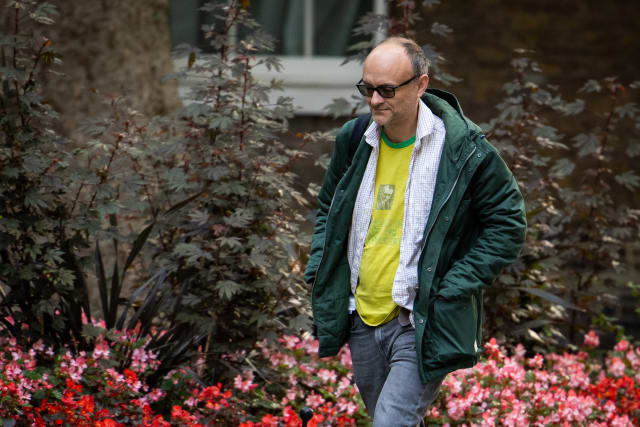 To his admirers Dominic Cummings is the maverick genius who overturned conventional wisdom to deliver one of the biggest political shocks in decades in the Brexit referendum.

For 16 turbulent months he has been the pivotal figure at the heart of Boris Johnson’s No 10 operation, the man the Prime Minister has looked to for direction and advice.

But his abrasive manner and open contempt for MPs and officials meant that he has had no shortage of enemies across Westminster.

And for a man who was supposed to operate behind the scenes, he gained unwanted public notoriety with his infamous trip to Barnard Castle in apparent breach of lockdown rules.

The visit, and his claim that he simply wanted to test his eyesight after recovering from coronavirus, attracted such attention that police complained it was undermining their efforts to enforce the regulations.

Always a divisive figure, Mr Cummings has never shied away from confrontation.

As a special adviser to Michael Gove in the coalition government, his propensity for engaging in political scraps, particularly with the Tories’ Liberal Democrat partners, caused David Cameron to describe him as a “career psychopath” and seek to bar him from Whitehall.

He was however to emerge as the former prime minister’s nemesis in the Brexit referendum of 2016, when was appointed director of the official Vote Leave campaign.

It was a role later to be dramatised in the Channel 4 drama Brexit: The Uncivil War, in which he was played by Benedict Cumberbatch.

From the off his tactics were controversial. He ordered the campaign bus to be emblazoned with the disputed claim that leaving the EU would save £350 million a week to spend on the NHS.

Critics complained that the figure failed to take into account the funding the UK received back from Brussels, but Mr Cummings was only too well aware that the controversy simply served to highlight the sums Britain was sending the EU.

He was credited with devising the “Take back control” slogan which was seen to capture the mood of disillusionment which helped drive the Brexit vote.

And he was responsible also for a final online advertising blitz highlighting a potential influx of immigrants from Turkey if Britain remained in the EU, even though there was no imminent prospect of the country joining the bloc.

He later wrote that if Mr Gove and Boris Johnson, who were fronting the campaign, had not “picked up the baseball bat marked ‘Turkey/NHS/£350 million’ with five weeks to go” the result could have gone the other way.

Throughout it all Mr Cummings made no secret of his contempt for the senior Tories on the Vote Leave board, complaining they would prefer to spend weekends off with their girlfriends than the hard business of campaigning.

There was therefore consternation among many at Westminster when Mr Johnson became prime minister in July 2019 and chose Mr Cummings to head up his No 10 operation.

Whitehall was given an early taste of how he would operate when he fired Sonia Khan, a special adviser to then chancellor Sajid Javid, and had her marched out of Downing Street by an armed police officer for alleged leaks.

With Parliament deadlocked over Brexit, he was seen as the author of the plan to prorogue its sittings, subsequently ruled unlawful by the Supreme Court, and the purge of the One Nation Tories who refused to back Mr Johnson’s deal for leaving the EU.

When the Prime Minister finally secured the general election he craved, it was Mr Cummings who came up with another simple but brutally effective slogan, “Get Brexit done”, which helped to propel him to an 80-seat majority.

With the Government’s position finally secure, Mr Cummings set about some of his pet projects, including an overhaul of the machinery of government, warning there was a “hard rain” coming for Whitehall.

A long-standing critic of what he regarded as the Oxbridge group think mentality which dominated the upper echelons of the civil service, he appealed for “weirdos and misfits with odd skills” to transform the way the country was run.

He was certainly happy to cultivate the image of himself as the maverick outsider, turning up to work in Downing Street in ill-fitting jeans and scruffy jumpers rather than traditional suit, collar and tie.

However with the outbreak of the coronavirus pandemic, his confrontational style was to come under increasing pressure.

Downing Street angrily denied one report that he had argued that it was “too bad” if some pensioners were to die if that was the price of developing herd immunity.

When details emerged of his unauthorised trip to a property owned by his parents in County Durham, followed by a further visit on his wife’s birthday to Barnard Castle, all in apparent breach of lockdown rules, there was a public outcry.

He defended his actions during an extraordinary press conference in the Downing Street rose garden, and Mr Johnson publicly backed him although he was said to be furious at what had happened.

Meanwhile the Government was facing increasing unrest in Parliament, despite its seemingly impregnable majority, with a series of rebellions by Tory MPs unhappy at the way they were being cut out by No 10.

In the end the multiple confrontations appear to have been too much. The final trigger for Mr Cummings’ departure was the failure of his ally Lee Cain to secure the post of Downing Street chief of staff.

The appointment would have sealed the grip of Mr Cummings and his Vote Leave faction on No 10. Instead the move backfired and it is now the one-time political Svengali who is on his way out.

While many at Westminster will rejoice at his departure, he leaves behind an indelible legacy with the Brexit vote.