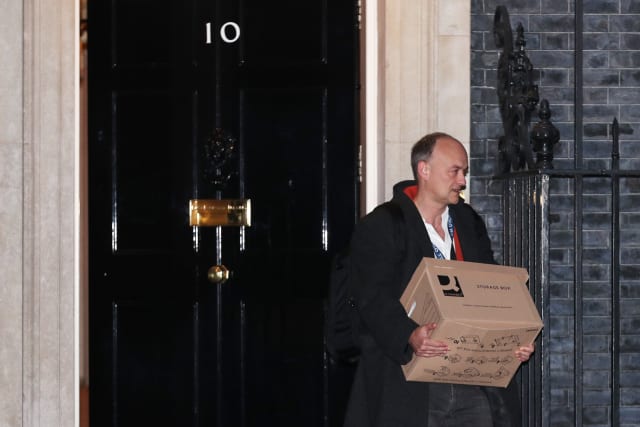 The move came as the BBC reported Mr Cummings had stepped down from his role with immediate effect, rather than waiting for the end of the year.

Conservative MPs had welcomed Mr Cummings’ departure as as Mr Johnson’s chief adviser amid a bitter power struggle in No 10 as a good opportunity for a “reset”.

On Thursday night, Mr Cummings insisted to the BBC that “rumours of me threatening to resign are invented” after it was suggested he would exit in protest over the treatment of his fellow Vote Leave veteran Lee Cain, who quit as communications chief a night earlier.

But Mr Cummings said his “position hasn’t changed since my January blog” in which he said he hoped to be “largely redundant” by 2021.

Tory backbenchers urged No 10 to use the exit of the aide whose mid-lockdown trip to Durham cemented his notoriety as an opportunity to restore the values of “respect, integrity and trust”.

Senior Tory MP Sir Bernard Jenkin said it is time to restore “respect, integrity and trust”, which he said have been “lacking in recent months” between No 10 and Tory MPs.

“It’s an opportunity to reset how the Government operates and to emphasise some values about what we want to project as a Conservative Party in Government,” the chair of the Commons liaison committee told BBC Radio 4’s Today programme.

“I’m not surprised in a way that it is ending in the way it is. No prime minister can afford a single adviser to become a running story, dominating his Government’s communications and crowding out the proper messages the Government wants to convey.