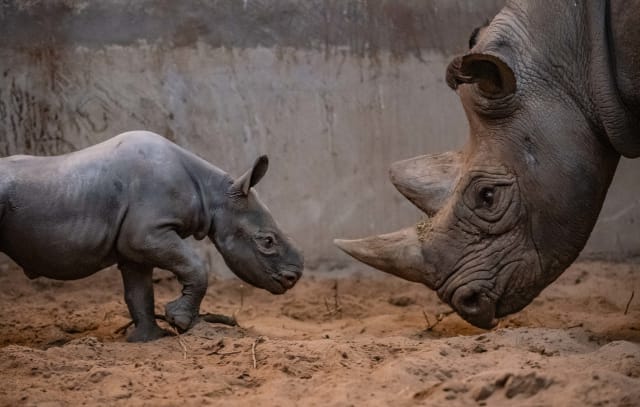 The birth of a rare baby rhino at Chester Zoo will be “celebrated globally”, according to keepers.

The arrival of the female eastern black rhino following a 15-month pregnancy was caught on camera at the zoo.

Pictures show the young calf suckling from her mother Ema Elsa just 10 minutes after she was born.

Andrew McKenzie, team manager of rhinos at the zoo, said: “The birth of a critically endangered eastern black rhino is always very special.

“And to be able to watch on camera as a calf is born is an incredible privilege – with rhino numbers so, so low it, sadly, isn’t something that’s captured very often.

“Seeing the little one then get to her feet with a gentle nudge from mum; take her first tentative steps and suckle for the first time is then the icing on the cake.”

Fewer than 1,000 eastern black rhinos remain on the planet.

“These rhinos have been pushed to the very edge of existence and every single addition to the European endangered species breeding programme is celebrated globally,” Mr McKenzie said.

The zoo is now asking animal lovers to help choose a name for the youngster.

Followers of the zoo on Facebook can take part in a poll to choose between Kasulu, Koshi and Kaari.