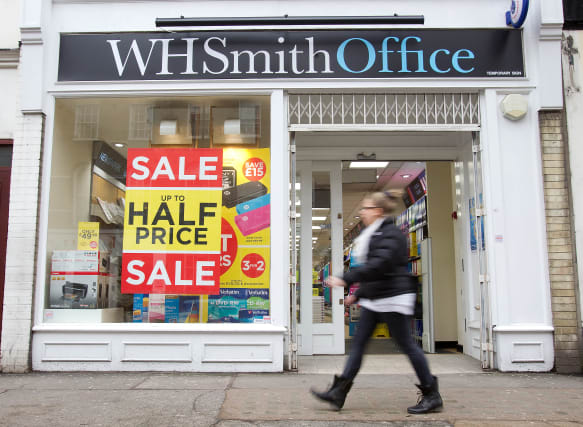 WH Smith fell deeply into the red in the last year as the Covid-19 pandemic forced hundreds of its shops to close, and put the brakes on its travel business.

The retailer lost £226 million before tax in the 12 months to the end of August, down from a £135 million profit a year ago, it said on Thursday.

Analysts at Investec had been expecting the loss to reach around £70 million to £75 million.

Revenue was down 33% to just over £1 billion, the company said, after a strong start to the year was interrupted by the virus.

“Since March, we have been heavily impacted by the pandemic,” said chief executive Carl Cowling.

Things had started looking up again, but last week England entered a second lockdown, leaving businesses that rely on physical sites in a tricky position.

After the announcement, WH Smith has 558 high street and 243 travel shops open.

Bosses said they had learnt the lessons from the first lockdown and could quickly furlough staff and manage their supply chain.

“We are expecting a significant decline in passenger numbers as a result of travel bans with the majority of our stores at airports and railway stations temporarily closed,” it said.

The travel business has been particularly badly hit since March. Over the last year revenue dropped 39% in the travel segment, hitting £344 million. Even its hospital stores saw revenue drop by 15% as visitors stayed away from health units.

The travel section made a trading loss of £1 million, down from a £97 million profit a year ago. The recovery is not likely to start until the second half of the current financial year.

Analysts were expecting WH Smith to present a tough set of results, with some at Investec already describing it as a “write-off” year.

Mr Cowling said: “While passenger numbers continue to be significantly impacted in the UK, our North American business, where 85% of passengers are domestic, is beginning to see some encouraging signs of recovery. In addition, we continue to open new stores in the US and win significant tenders across major US airports.

“In high street, we had seen a steady recovery and we were well set up both in stores and online as we went into the second lockdown. We currently have 558 stores open.”

In August the company warned it might cut around 1,500 jobs after sales tapered off.