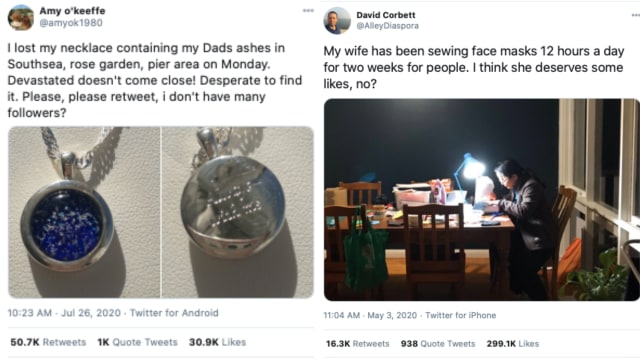 Twitter has compiled its top acts of kindness in the UK throughout the pandemic to put a focus on those “coming together in support of one another”.

The tweets, which include charitable donations, birthday wishes, and helping hands for struggling businesses, have been compiled ahead of World Kindness Day on Friday.

Here are some of their selections:

One Twitter user, named Chris, was inundated with support after tweeting that he would be spending his birthday alone during the pandemic, with his request trending on the platform.

After the huge response, he said: “A massive thank you to everyone who wished me happy birthday, you have shown so much love, it’s made more than my day.”

Meanwhile, a care home went viral after a resident was given a heart-warming gift to remind him of his late wife.

In an act of kindness that went viral, Ken, who lives at Thistleton Lodge in Preston, was given a pillow decorated with his late wife’s photo by staff member Kia Mariah Tobin.

In another act of generosity, a British long jumper trying to get to the Tokyo Olympics was given over £8,000 by clothing brand Gymshark.

Daniel Bramble tweeted after the donation: “My head is gone. Thank you so much Gymshark. Best belated birthday present ever (sorry mum).”

After a small antique bookshop made an appeal for help after selling “not a single book” in one day, Twitter users banded together to help the store out with sales.

Petersfield Bookshop tweeted the following day saying: “What a night! We have been completely overwhelmed in a good way … We have over 300 messages, many asking after books. We will answer all as soon as we can, please bear with us.”

A woman was able to drum up support for her father’s curry restaurant in east London after posting details of the venue when he was struggling for business.

She tweeted: “Hey Twitter! Not one to do this, but my dad owns the oldest Indian restaurant in East London and has been struggling with customers so please show some love! If you’re in Aldgate come have a curry, I’m biased but it’s the best!”

She later thanked her fellow users for their “massive amount of support”.

After a six-year-old helped his family’s builder create a patio, he was left a pay slip for £10 that “made his day”.

His mother tweeted: “We have just had our patio done and my six-year-old has loved going out and helping the builder, so it made his day to receive this. What an example of kindness.”

A Twitter user was welcomed to the social media platform at 94-years-old, stating that it would help her “get down with the young ones”.

In her very first tweet, Bryony Burrell said: “At 94-years-old, I never imagined that I’d ever be new to anything again, but I’m new to Twitter! This is my first Tweetle.

“This will show my grandson that I can get down with the young ones. The only problem I have, is getting back up again!”

– Chef helps out an elderly neighbour

Chef Anthony O’Shaughnessy posted on Twitter that he had been cooking for his elderly neighbour every night during lockdown.

He said: “I’ve been feeding the old man next door for about a month now. I ring him before I make dinner so I know to make extra.

“I just called to let him know what I’m making tonight: Broccoli Parmesan Farfalle and Lime-Frosted Carrot Cake. ‘I look forward to this every day’ he said.”

David Corbett received an outpouring of support on social media after he thanked his wife for working tirelessly to make face masks during lockdown.

Mr Corbett said: “My wife has been sewing face masks 12 hours a day for two weeks for people. I think she deserves some likes, no?”

– Woman “humbled” by Twitter response to loss of father’s ashes

Finally, Amy O’Keeffe received thousands of retweets after reaching out for help locating a necklace containing her father’s ashes.

Though she never found the necklace after losing it in Southsea, she said she was “humbled” by the response she received from people online.

“Thank you so much for all the kindness you have shown me, a stranger! I had 32 followers and you have retweeted over 40k times,” she said.