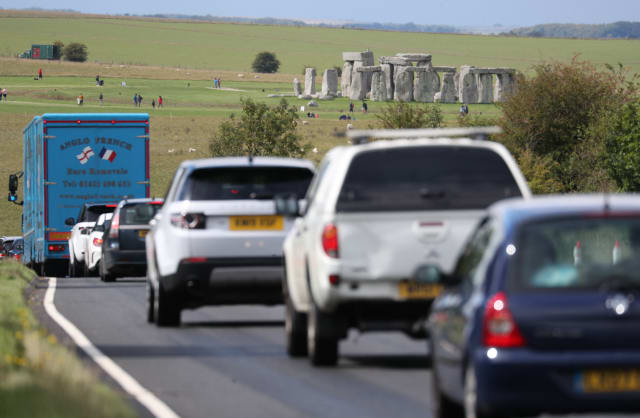 A controversial plan to dig a road tunnel near Stonehenge has been given the go-ahead by Transport Secretary Grant Shapps.

The decision, announced by Transport Minister Andrew Stephenson, goes against the recommendations of planning officials, who warned it would cause "permanent, irreversible harm" to the World Heritage Site.

The A303, which is a popular route for motorists travelling to and from the South West, is often severely congested on the single carriageway stretch near the stones in Wiltshire.

Highways England says its plan for a two-mile tunnel will remove the sight and sound of traffic passing the site and cut journey times.

But some environmentalists and archaeologists have voiced their opposition to the plan due to its potential impact on the area.

In June it emerged that a team of archaeologists had discovered a ring of at least 20 large shafts within the World Heritage Site, a short distance from the stones.

The project is classified as nationally significant, which means a Development Consent Order is needed for it to go ahead.

The Planning Inspectorate – an executive agency of the Ministry of Housing, Communities and Local Government – recommended the Transport Secretary withhold consent because the project would substantially and permanently harm the integrity and authenticity of the World Heritage Site, which includes the stone circle and the wider archaeology-rich landscape.

In a report to Mr Shapps, the officials said permanent, irreversible harm, critical to the outstanding universal value of the site, or why it is internationally important, would occur, "affecting not only our own, but future generations".

The Department for Transport wrote to Highways England stating that: "The Secretary of State is satisfied that, on balance, the need case for the development together with the other benefits identified outweigh any harm."

There is now a six-week period in which the decision can be challenged in the High Court.

Highways England chief executive Jim O'Sullivan said: "This transformational scheme will return the Stonehenge landscape towards its original setting and will improve journey times for everyone who travels to and from the South West."

Project director Derek Parody said: "It is a scheme objective to conserve and enhance the World Heritage Site and this is being achieved through close collaborative working with heritage groups, including English Heritage, National Trust, Historic England and the independent A303 Scientific Committee."

Professor David Jacques, of the University of Buckingham, who has been working since 2005 on the Blick Mead area within the world heritage site, close to where the road will run, said the decision was "gut-wrenching".

He said investigations at Blick Mead had revealed thousands of years of Mesolithic occupation, ancient plant DNA which provides a record of the landscape, and well-preserved aurochs' hoofprints.

"The tunnel is going to clearly compromise the archaeology. Whose interest is that in? It makes no sense," he said.

Preparatory work is due to begin in spring next year, with the five-year construction phase expected to start by 2023.

This means the tunnel is likely to open one year later than initially planned.

Chancellor Rishi Sunak announced in March that funding is in place for the project, which is part of a £1.7 billion upgrade of the A303.

Public-private funding was due to be used to finance the work, but in October 2018 then-chancellor Philip Hammond cancelled future deals using that model.