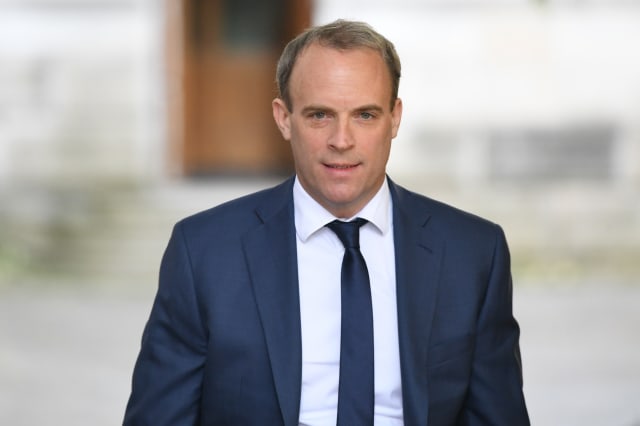 Britain has accused China of violating its international treaty commitments after Beijing ordered the expulsion of four opposition MPs from the Hong Kong parliament.

Foreign Secretary Dominic Raab said the move represented a “clear breach” of the Sino-British Joint Declaration which was supposed to guarantee the former colony a high degree of autonomy under Chinese rule.

But his comments drew an angry response from Chinese ambassador Liu Xiaoming, who insisted the expulsions are “purely an internal affair” for China.

Mr Liu was summoned to the Foreign, Commonwealth and Development Office (FCDO) as UK diplomats sought to formally register the Government’s “deep concern” over Beijing’s actions.

Afterwards, he tweeted: “Hong Kong is China’s Hong Kong. No foreign country has the right to intervene in the matter.”

China’s actions have also been condemned by the United States, the European Union and Australia, and Mr Raab said the UK will work with its allies to hold Beijing to its obligations under international law.

He said in a statement: “Beijing’s imposition of new rules to disqualify elected legislators in Hong Kong constitutes a clear breach of the legally binding Sino-British Joint Declaration.

“China has once again broken its promises and undermined Hong Kong’s high degree of autonomy. The UK will stand up for the people of Hong Kong, and call out violations of their rights and freedoms.

The FCDO said it regards the latest breach as the third time Beijing has violated the provisions of the Joint Declaration since the handover of the former British colony to China in 1997.

The most recent previous occasion was last year when China imposed national security legislation, giving it sweeping powers to curtail protest and suppress dissent in the territory.

The four pro-democracy MPs were expelled from the legislative council after calling on foreign countries to impose sanctions on China in response to its crackdown on opposition.

The move was denounced by China’s Hong Kong and Macao Affairs Office as “an open challenge” to the authority of the central government and the Basic Law, Hong Kong’s constitution.

It said: “If these lawmakers hope to use their resignation to provoke opposition and beg for foreign interference, they have miscalculated.”

In Beijing, Chinese foreign ministry spokesman Wang Wenbin said it is fully behind the Hong Kong government over the expulsions.

He told a daily news briefing: “No country will turn a blind eye to acts of betrayal of the country by public officials, including members of the legislative council, who break their oaths of office.”

However Wu Chi-wai, the head of the pro-democracy bloc, said it effectively marks the end of the “one country, two systems framework” which was supposed to guarantee Hong Kong’s freedoms.

“We lost our check-and-balance power, and all the constitutional power in Hong Kong rests in the chief executive’s hands,” he said.

Claudia Mo, a pro-democracy MP who also handed in her resignation, insisted their departure does not mark the end of their struggle for rights.

“We are quitting the legislature only at this juncture. We’re not quitting Hong Kong’s democracy fight,” she said.