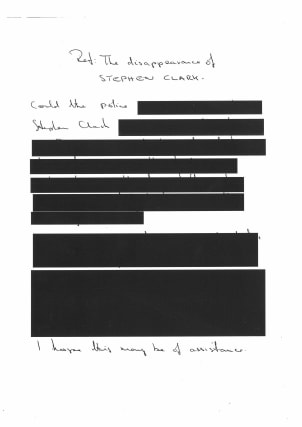 Detectives investigating the 1992 murder of a man who was said to have gone missing on a family walk have released an excerpt of an anonymous letter written to the police more than 20 years ago.

Steven Clark’s elderly parents Doris and Charles have been arrested and questioned about his death and their neat semi in Marske-by-the-Sea, Cleveland, was searched in September.

They have denied any responsibility and his mother described the situation as “absolutely ludicrous”.

Police treated the 23-year-old’s mysterious disappearance as murder following a recent cold case review, although his body has not been found.

Cleveland Police have now released an excerpt from an anonymous letter which was sent to the force in 1999 and which claimed to know that Mr Clark was dead, and named the person responsible.

The force has previously released an image of the envelope used.

Detective Chief Inspector Shaun Page, who is leading the investigation, said: “This letter is just one of several key lines of enquiry in the case.

“The letter was sent to Guisborough police station and is very precise in nature.

“The letter writer intimated that Steven was dead and that they claim to know the person responsible.

“It was 21 years ago, so the letter writer could have died since then, but if anyone recognises the handwriting, we would urge them to get in touch.”

Mr Page added: “Steven left his personal belongings at home when he disappeared. His wallet, glasses, and watch.

“He was a sociable character and was liked by the friends who knew him.

“He had lived in South Africa until he was around the age of 20, having moved there when he was younger. His life in Marske was different from the more restricted way of life overseas.”

A missing person’s report at the time he vanished stated Mr Clark was on a family walk on December 28 1992 when he used a public toilet in Saltburn at around 3pm.

His mother used the ladies, waited for him to come out, then assumed he had gone home when he failed to leave, so she expected him to arrive at the house.