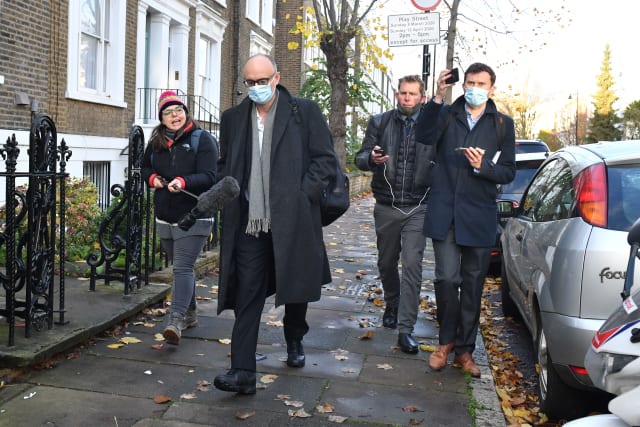 Downing Street has insisted Boris Johnson remains “absolutely focused” on tackling the coronavirus pandemic despite a bitter power struggle in No 10 leading to the resignation of one of his closest aides.

Lee Cain’s resignation as director of communications meant the Prime Minister was having to perform a shake-up of his top team during the second national lockdown in England and with post-Brexit trade negotiations growing ever closer to the deadline.

He had been offered the post of chief of staff but a backlash among Tories and Mr Johnson’s inner circle ultimately led him on Wednesday to announce his departure from No 10 rather than a promotion.

His exit has sparked speculation that he could be followed by Dominic Cummings, Mr Johnson’s top adviser who is seen as the most powerful figure in No 10.

The Prime Minister’s official spokesman James Slack, who confirmed he would be replacing Mr Cain when he departs in the new year, insisted that Mr Johnson was not being distracted from the national crisis by the bitter row.

“You’ve seen from the Prime Minister this week that he’s absolutely focused on taking all the steps that are required to equip the country to beat coronavirus,” the spokesman said.

Mr Slack, a former Daily Mail journalist who also served as Theresa May’s official spokesman when she led the country, said he would remain a civil servant when he succeeds Mr Cain.

Westminster was on resignation watch for other key figures in Downing Street.

Mr Cummings, a close political ally of the departing communications chief having worked together since the Brexit campaign, was said to be unhappy with the way his friend had been treated.

But he was reported to be staying put for now to work on the Government’s response to Covid-19, in particular the acceleration of the mass testing programme.

He declined to answer journalists’ questions as he left his home on Thursday morning, while Mr Cain was spotted heading into No 10 clutching a coffee.

Ms Symonds is a former Tory press chief who has served as a special adviser in previous governments.

Ministers attempted to play down the chaos at the heart of government.

“He is surrounded by a good team, a strong team of advisers, and, of course, the Cabinet.”

Former minister Jake Berry said Mr Cain’s departure was a “good move”, suggesting the administration was transitioning from a “campaigning operation” to one focused on good governance.

“The departure of Lee Cain does show, I think, that the Prime Minister is taking back control of his Government,” he told ITV’s Good Morning Britain.

In his resignation statement, Mr Cain – a former tabloid journalist – said he had decided to resign as communications director after “careful consideration”.

He said it was an “honour” to have been offered the post of chief of staff and he thanked the Prime Minister for his “loyalty and leadership”.

In response, Mr Johnson paid tribute to Mr Cain’s “extraordinary service” to the Government over the past four years and described him as a “true ally and friend”.

Mr Cain originally joined Mr Johnson when he was made foreign secretary by Mrs May following the 2016 Brexit referendum.

He stuck with Mr Johnson when he quit two years later over her proposed Brexit deal and worked on his campaign to succeed her as Tory leader.

The latest manoeuvrings come amid growing unhappiness among increasing numbers of Conservative MPs at the performance of No 10 and its handling of the Covid-19 outbreak.