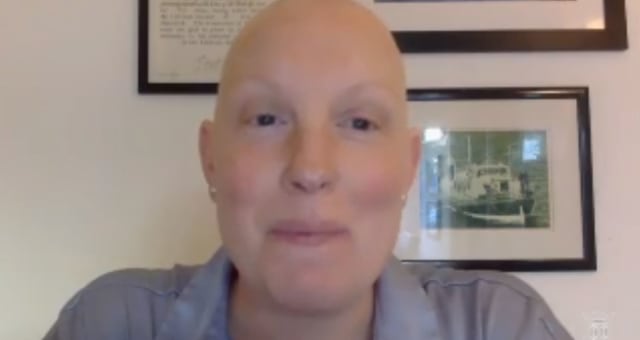 A Conservative former minister who was diagnosed with breast cancer has told Jacob Rees-Mogg to stop thinking MPs who are working at home are “shirking” their duties.

The Chatham and Aylesford MP, who has been working remotely during the pandemic, expressed her disappointment at not being able to take part in a Westminster Hall debate on the future of breast cancer services and the impact of Covid-19 on breast cancer diagnosis.

Mr Rees-Mogg said that there is a “careful balance” to be struck, insisting that scrutiny of legislation is best done in person.

Ms Crouch told the Commons: “(Mr Rees-Mogg) will be aware there is a debate in Westminster Hall today on breast cancer which, because of his ruling, some of us with real and current life experience of the disease are disappointingly unable to participate in.

“Now, while I respect (Mr Rees-Mogg’s) commitment to traditional parliamentary procedures, I’m sure if he was on the backbenches and not the fine specimen of health and fitness he clearly is, he would be arguing forcefully for members to be able to contribute more often in proceedings by modern technology.

“Perhaps even currying favour with you, Mr Speaker (Sir Lindsay Hoyle), by suggesting that not every contribution to a debate requires an intervention.

“Given that hybrid proceedings have been extended, would he please stop thinking those of us at home are shirking our duties – in fact, quite the opposite – and urgently reconsider virtual participation, even if just for general backbench and Westminster Hall debates.”

Mr Rees-Mogg responded: “May I begin by wishing (Ms Crouch) well, I think the whole House joins me in praying for her swift recovery.

“She knows she is one of the most popular and respected members of this House who has campaigned on a cross-party basis on a number of issues very effectively, and so we all wish her extremely well.

“I think the point with Westminster Hall is that that was brought back at a point at which the broadcasting facilities were already being fully utilised, so it wasn’t an issue then of whether we wanted to do it or not, it simply wasn’t an option, and the demand to bring back Westminster Hall was great across all parts of the House.

“But members who are shielding, who are seriously, critically vulnerable, are able to participate in many aspects of the House’s business.

“But we do have to get a balance between the needs of honourable members and the needs of the House as a whole to proceed with its business.

“And with debates, we do need to have the proper holding to account of ministers which is the purpose of the debates and to have the interventions that make a debate rather than a series of statements.

“So it is a question of striking a careful balance in these difficult times between ensuring Parliament can serve its constituents in full and making sure that members can complete their duties as safely and as effectively as possible.”

Mr Rees-Mogg had earlier reiterated that MPs will not be allowed to return to voting remotely.

Shadow Commons leader Valerie Vaz said: “It is no wonder the leader doesn’t want to return to remote voting, where you actually have to vote for yourself… (David Davis) was right, wasn’t he, when he said it is an affront to the House and everything the House stands for that there were all these 203 proxy votes cast by the whip.”

Mr Rees-Mogg replied: “(Ms Vaz) mentions (Mr Davis) who, of course, himself gave a proxy to the deputy chief whip and proved the efficacy of the system because he was able to take his proxy away and vote the way he wanted to having listened to the debate.

“So this is a way that is working, it is effective, it has reduced the queues in the division lobbies – which, I know, was a great concern of (Ms Vaz).

“I’m afraid we need to be here in person. Government business has to be carried through, important pieces of legislation have to be scrutinised, and this is best done in person, as we found when we were hybrid earlier in the year. So there will not be a return to remote voting.”