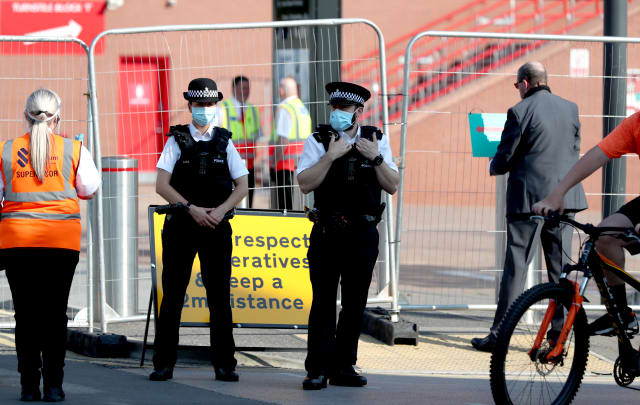 More than 800 police officers in the UK have tested positive for Covid-19 since the pandemic began, figures show.

Data obtained through freedom of information requests by the PA news agency’s RADAR service show 849 officers across 24 of the UK’s 45 forces have tested positive for the virus.

The Police Federation said officers across the country are in “constant worry” when faced with offenders who may spit, bite and cough while being dealt with.

The figures include 228 officers from Police Scotland, 101 from West Midlands Police and 95 from Greater Manchester Police.

The figures do not include the Metropolitan Police, which is yet to respond to the FOI request submitted in September, and the other 20 forces who did not provide the information.

Forces that responded did so between October 6 and November 6, so case numbers could now be higher.

In August, the National Police Chiefs’ Council and College of Policing issued new guidance to forces on the use of personal protective equipment.

Advice was also given on social distancing and enhanced hygiene measures, but it was accepted that maintaining a two-metre distance was not always possible.

John Apter, chairman of the Police Federation, said it was “inevitable” some officers would catch the virus given the nature of their work.

He added: “As well as the danger of contracting the virus, policing the pandemic is also taking a toll on the mental health and wellbeing of officers as they continue to work 12-hour shifts and have rest days cancelled to help protect the public at this difficult time.

“There is also the constant worry of bringing the virus home to their loved ones, which is exacerbated when they deal with offenders who weaponise the virus by spitting, biting and coughing – which is disgusting and unacceptable.

“People need to realise that behind the uniform, officers are mothers, fathers, sons and daughters.”

Mr Apter urged the public “not to give up now” on suppressing the virus and to follow latest guidelines to reduce its spread.

Chairman Martin Hewitt said: “Whilst demand levels remain high we are well-prepared to respond to any crime or other issues that arise.”

Aside from the 24 police forces that responded, Durham Constabulary said 37 officers had been absent due to Covid-19, while Wiltshire Police said 134 officers had reported Covid-19-related sickness.

These figures are not included in the total of those testing positive.

Other forces have not come back with a response or refused to answer on grounds such as the protection of personal identities and intention to publish the information at a future date.