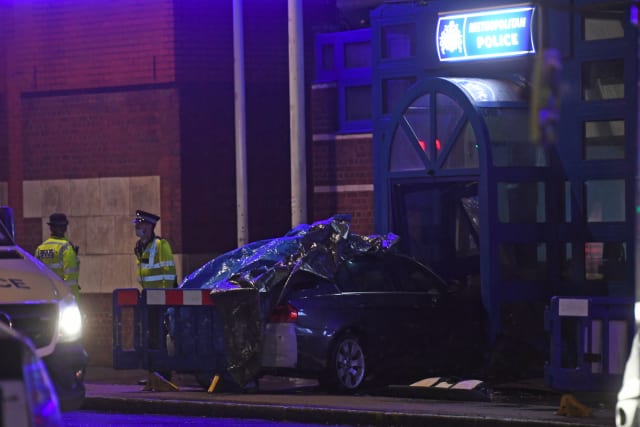 A man arrested on suspicion of crashing his car into a police station before setting fire to the road using petrol is being questioned by detectives.

Officers were evacuated from Edmonton Police Station in north London and residents were told to leave their homes following the incident on Wednesday night, but they have now been allowed to return.

The Metropolitan Police said “a 45-year-old white man” arrested at the scene on suspicion of arson, affray and criminal damage remains in custody at a north London police station.

No-one was injured in the collision or blaze at around 8pm and the incident is not being treated as terror-related.

Detective Chief Superintendent Treena Fleming said: “I would like to thank the local community for their patience and co-operation while officers dealt with this incident and the resulting scene.

“This was not believed to be terror-related and those living and working in the area can be reassured that this appears to have been an isolated incident that poses no ongoing risk to community safety.

“My thanks and admiration go to the brave officers who responded to this incident without hesitation in order to keep the public safe, and also to the members of the public who assisted in detaining the suspect without fear for their own safety.

“We are keen to speak to the members of the public who helped at the scene and ask that they contact us on 101, quoting CAD 6388 of November 11.”

Police are asking anyone with pictures or video of the incident to upload them at ukpoliceimageappeal.co.uk.

Footage posted online shows a man leaving the car following the crash and then pouring petrol on to the road from a container.

Standing in front of a double-decker bus, he then sets the liquid on fire.

Witnesses can be heard shouting as a police car pulls up and officers run out to tackle the man at a bus stop metres away.

Another police officer appears to use a fire extinguisher to put out the flames on the road.