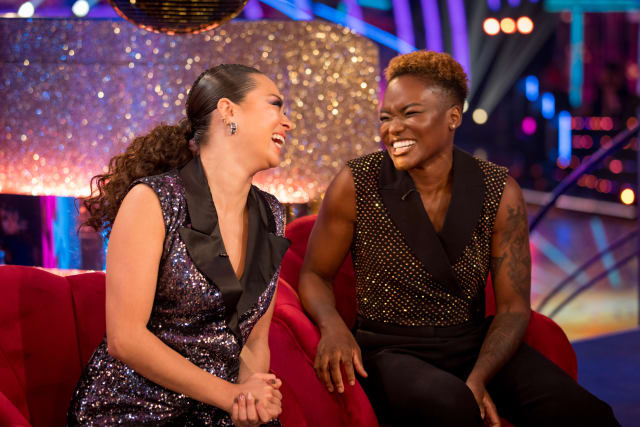 Katya Jones has described her Strictly Come Dancing celebrity partner Nicola Adams as “my hero” after testing positive for coronavirus, forcing them to leave the show.

The Russian professional dancer, 31, shared her heartbreak in a post on Instagram after receiving a positive test while asymptomatic.

Alongside a picture of herself and Olympic boxer Adams, she said: “My heart is broken I’m utterly gutted this Special journey had to end this way and you don’t get to give more.

“@nicolaadams You are a woman who didn’t need a hero, you became one. Definitely my hero.

“To everyone, thank you for your tremendous support and we will keep dancing for you guys one way or another.

“@bbcstrictly Meanwhile, please stay safe everybody. And to all my friends who’re still in the show- go for it!”.

The pair – who made history as the BBC One show’s first same-sex couple – are currently self-isolating separately.

Olympic gold medalist Adams, 38, will not be able to continue competing with a new professional partner as she must quarantine for 14 days.

The PA news agency also understands a number of crew members have been forced to self-isolate after coming into contact with Jones.

The rest of the cast are unaffected and the show will continue this Saturday night on BBC One, according to the broadcaster.

A statement from the BBC said: “Nicola Adams and Katya Jones are to leave Strictly Come Dancing after Katya tested positive for Covid-19.

“Katya is asymptomatic and the pair are now self-isolating separately following the latest government guidelines. As part of the protocols outlined ahead of the series, this sadly means they will no longer be able to take part in the competition.”

In a statement, Adams said: “Hey guys. I’m absolutely devastated my Strictly journey has come to an end so soon. I had so much more to give and so many people to win this for. But I just want to say a huge thank you to Katya for being the best dance partner anyone could ask for.

“She pushed me way out of my comfort zone and it’s been an incredible experience. I’m gutted to be out of the competition but in these unprecedented times and as frustrating as it is, the Covid measures in place are to keep everyone safe, and I’m doing what I can to help.

“I’ll be spending the next 14 days isolating so I’d like to apologise in advance for the ridiculous amount of TikToks I’ll be posting, in my new found free time when I’m not gaming.”

Sarah James, Strictly Come Dancing’s executive producer, said: “We are incredibly sad that these unfortunate circumstances mean that Nicola and Katya are unable to continue on Strictly.

“They are a brilliant partnership and had already achieved so much during their time on the show.

“We’d like to thank them for their commitment and although their time in the competition has sadly come to an end we are hopeful that there will be opportunities for them to dance again in the future.”

It comes after Rylan Clark-Neal, who co-hosts It Takes Two, began self-isolation after coming into contact with someone outside of work who had tested positive for Covid-19.

In a message on Twitter on Thursday, he said he had since returned a negative test result.

Adams and Jones found themselves in the dance-off last week after failing to impress with their Grease-inspired routine.

However, they were saved by the judges and former NFL player Jason Bell instead became the second celebrity to get the boot.

The previous week Adams and Jones wowed the panel with an emotive routine to Shine by Years & Years, scoring 24 and placing them towards the top of the scoreboard.

Adams – nicknamed The Lioness – retired from boxing with an undefeated record and held the WBO female flyweight title last year.

She also became the first openly LGBT person to win an Olympic boxing gold medal, after her triumph at the 2012 Games in London.

She is dating Ella Baig and has been praised as an LGBT role model.

Her debut on the show marked the first time a same-sex couple had competed in Strictly, following years of speculation.

However, Johannes Radebe and fellow professional Graziano di Prima made history when they performed together as a male-male combination on the BBC show last year.