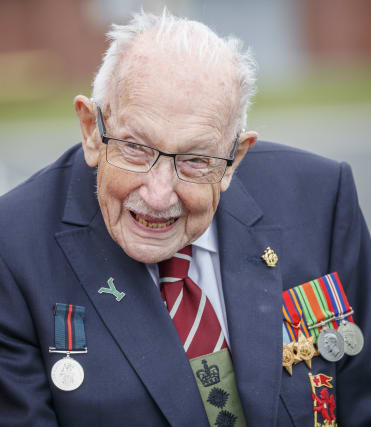 Captain Sir Tom Moore’s charity has been “inundated with messages of support” since the launch of its campaign to ease loneliness during England’s second lockdown, his daughter said.

The Walk With Tom campaign was inspired by Sir Tom’s 100 laps of his garden before his 100th birthday to raise funds for the NHS during the first lockdown.

The new campaign, launched on the first day of the second lockdown, aims to get as many people as possible walking and talking, spreading hope and easing loneliness.

People are encouraged to share their journeys on social media, whether it be 100 laps like Sir Tom, a marathon or a toddler’s first steps, using #WalkWithTom to support each other’s achievements.

The London Marathon Events team is supporting the campaign, using its social media channels to spread the word to more people and to respond to online messages.

Sir Tom’s daughter Hannah Ingram-Moore, who is co-founder of The Captain Tom Foundation, said: “Following the launch of #WalkWithTom, we’ve been inundated with messages of support and were aware we had a huge opportunity to drive further positive impact.

“The additional support of London Marathon Events will allow us to do just that, engaging supporters from across the country, maybe even the world, to join us on our mission.”

The Captain Tom Foundation is urging people to “walk to help yourself; talk to help someone else and give, if you can, to help everyone”.

Hugh Brasher, event director of London Marathon Events, said: “We are very proud to have been asked by The Captain Tom Foundation to support the #WalkWithTom campaign.

“Captain Tom is a truly extraordinary man who has provided hope and motivation to millions during these very challenging times.

“We are honoured to work with him and his family to help inspire as many people as possible to join Captain Tom’s Army of Hope.”

Among those joining in are McLaren Formula 1 driver Lando Norris, who said: “Captain Tom is an absolute legend to me and I’m sure millions around the UK feel the same.

“I really encourage people across the country to join the #WalkWithTom movement and support those struggling with mental health at this difficult time.

“I will be on my track walks each race weekend doing my bit.”

To join in, the Captain Tom Foundation is asking people to #WalkWithTom by meeting someone and going on a socially-distanced walk together or by calling someone as you walk.

You can also walk to raise money for charity, just as Sir Tom did during the first lockdown, or make a donation to the charity of your choice.