What is the significance of the grave of the Unknown Warrior? 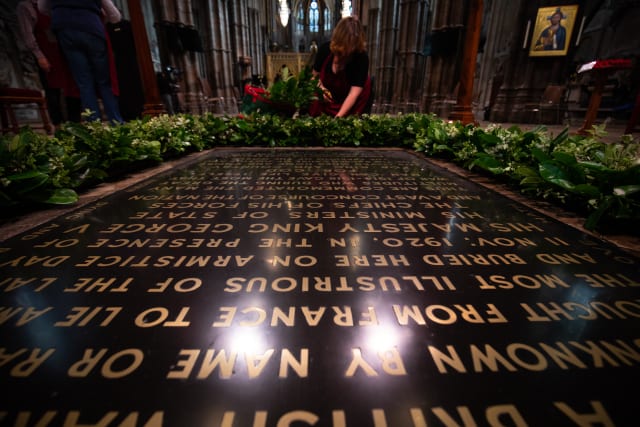 Over the course of a century an unidentified British serviceman buried in London’s Westminster Abbey has come to represent all those lost in conflict who have no grave of their own.

The funeral of the Unknown Warrior, laid to rest at the west end of the abbey’s nave, was attended by King George V on November 11 1920.

Its centenary was marked by a private, socially distanced service on Armistice Day on Wednesday, amid the ongoing coronavirus pandemic.

The concept of the grave of the Unknown Warrior was inspired by the Reverend David Railton, who served as a chaplain on the Western Front during the First World War.

In 1916 in a back garden at Armentieres, northern France, he came across a grave with a rough cross on which were written the words “An Unknown British Soldier”.

After the conflict he wrote to the then Dean of Westminster, Herbert Ryle, about his proposal for a memorial which was later supported by the King and the then Prime Minister David Lloyd George.

The body was chosen from four unknown British servicemen, exhumed from four battle areas, by Brigadier General Louis Wyatt, commander of British forces in France and Flanders, and transported back to Britain.

An initial plain coffin was placed inside another made from an oak tree which had grown in Hampton Court Palace garden.

It was covered with the flag that Mr Railton had used as an altar cloth during the war, known as the Padre’s Flag, which now hangs in the abbey’s St George’s Chapel close to the Unknown Warrior’s grave.

The destroyer HMS Verdun, whose ship’s bell now also hangs in the abbey near the grave, transported the coffin to Dover, and it was taken by train to Victoria station in London where it rested overnight.

On November 11 1920, the coffin was draped with the union flag and taken on a six-horse gun carriage along crowd-lined streets to the Cenotaph, where the Queen’s grandfather George V placed a wreath upon it.

The King had stopped by the war memorial on nearby Whitehall for its inauguration that day.

The King was present, with his son the future King George VI, as the warrior was buried at the abbey, and dropped a handful of earth from France on to the coffin during the service.

A congregation of around 1,000 mourners, including an honour guard of 100 holders of the Victoria Cross, Britain’s highest award for valour, were present for the event.

At the end of the service, after the hymn Abide With Me and prayers, the congregation sang poet Rudyard Kipling’s Recessional “God Of Our Fathers” followed by the Reveille being sounded by trumpeters.

On November 11 1921, a black marble stone was unveiled as a replacement to the temporary stone that initially covered the grave.

Its inscription reads in part: “Beneath this stone rests the body of a British warrior unknown by name or rank, brought from France to lie among the most illustrious of the land, and buried here on Armistice Day 11 Nov 1920.”

The grave has since become a place of pilgrimage for those whose military loved ones have died in conflicts as well as a focus of a touching royal tradition.

The late Queen Mother established the tradition of royal brides sending their wedding bouquets to the abbey to be placed on the grave after leaving her posy there after her wedding to the Duke of York, later George VI, in 1923.

The flowers were left in memory of her brother Fergus, who was killed in 1915 during the global conflict.

Last weekend, the Queen, who was married at the abbey in November 1947, left flowers based on her wedding bouquet at the grave.