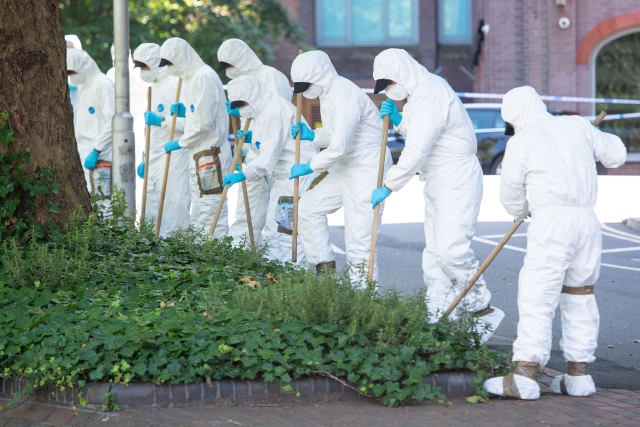 The man responsible for the deaths of three friends in the Reading park knife attack has pleaded guilty at the Old Bailey to murder.

Here is a timeline of the Forbury Gardens stabbing spree, which police declared a terror attack.

Around 6.45pm: Witnesses say a lone attacker with a knife targeted a group of people in Forbury Gardens near Reading town centre.

Just before 10pm: Police ask members of the public not to share the graphic images or videos of the incident that are circulating on social media during the evening.

Just before 11pm: Sources tell the PA news agency the incident is suspected to be terror-related.

Around 1.30am: Thames Valley Police confirms three people have died and another three are seriously injured.

The force confirms a 25-year-old man is under arrest on suspicion of murder.

8.30am: The incident is declared by police a terrorism incident.

Just after 12pm: Metropolitan Police Assistant Commissioner Neil Basu says there is nothing to suggest anyone else was involved in the attack.

After 1pm: Suspect is understood by PA to be named Khairi Saadallah.

Prime Minister Boris Johnson says he is “appalled and sickened” and pledges “we will not hesitate to take action” if there are lessons to be learned.

4: 55pm: One of the victims in the Reading terror attack is named by The Holt School in Wokingham as James Furlong, its head of history and government and politics.

Just before 6pm: Security sources reveal Saadallah briefly came to the attention of the security services in 2019, but the information provided did not meet the threshold for investigation.

19.06: The suspect is re-arrested under Section 41 of the Terrorism Act 2000, Counter Terrorism Policing South East announce.

20.25: Mr Furlong’s family releases a statement through Thames Valley Police in which his parents describe him as “the best son, brother, uncle and partner you could wish for”. They add: “We are thankful for the memories he gave us all. We will never forget him and he will live in our hearts forever.”

The two other victims of the attack are named locally as 39-year-old Joe Ritchie-Bennett, a US citizen who reportedly moved to the UK 15 years ago, and David Wails.

Lessons are cancelled at The Holt School and more than 100 pupils gather to lay flowers and other tributes at the gates.

Police confirm the three friends killed in the attack each died from single stab wounds.

Three other victims who were taken to hospital with stab injuries were also discharged.

The mayor of Reading, David Stevens, says the town’s community “shall not be divided” by the recent terror attack at a vigil held in memory of the victims one week on.

The Government renews calls for schools, offices, hospitals and other public places to be prepared for terrorist attacks following the stabbings.

Saadallah appears at the Old Bailey in London via video-link from Belmarsh Prison for a brief hearing where he only confirms his name, date of birth and his nationality as Libyan.

Saadallah, now aged 26, returns to the Old Bailey where he pleads guilty to three murders and three attempted murders.

He had been due to go on trial at the same court on November 30.

The judge tells the court the defendant has submitted a basis of plea, denying substantial preparation or planning, and saying he was not motivated by an ideological cause, in contrast with the prosecution case which is that it was a terror attack.

The judge adjourned sentencing until the week of December 7.