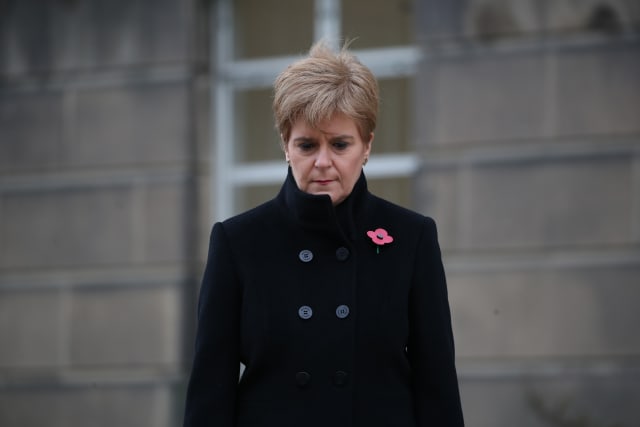 Nicola Sturgeon paid tribute to the nation’s war dead as Armistice Day was marked across the county.

The First Minister said the sacrifice of those who “helped to secure the freedoms we enjoy today” must never be forgotten.

She added it “reminds all of us of the devastating cost of war”.

The First Minister said: “On the 11th of November 1918 the guns fell silent and the First World War came to an end.

“Every year, on Remembrance Day, we commemorate that event. We remember those who died in that war and in subsequent conflicts.

“And in doing so we pay tribute to the continuing service and sacrifice of our Armed Forces community.”

She added: “Ordinarily, of course, this occasion would be marked through commemoration events across the country.

“They provide an opportunity for people to come together, to reflect and to pay their respects.

“Sadly, because of Covid, these events will have to be very different this year and our national services of remembrance, unfortunately, will not be open to the public.

“However, I know that people across Scotland will still be taking the time to mark this Remembrance Day.”

Ms Sturgeon observed the two-minute silence at St Andrew’s House in Edinburgh alongside service personnel from the Navy, Army and RAF.

She remembered all those “from Scotland, the UK, the Commonwealth, and around the world who paid the ultimate price”.

The First Minister said: “Their sacrifice must never be forgotten. It reminds all of us of the devastating cost of war.

“Their sacrifice helped to secure the freedoms we enjoy today.

“And it should inspire all of us now to do everything we can to build a better, safer, more peaceful world.”

Members of the public were urged to mark the occasion from their doorsteps due to coronavirus but some scaled-down memorial events were held.

Veterans were among those in attendance at the Garden of Remembrance in Edinburgh.

The Erskine charity, which provides care for veterans and their spouses, said due to the Covid-19 pandemic many veterans would observe the silence “from the safety and privacy of their care homes”.

He said: “Erskine would hope that any politicised defender or decrier of the poppy could look at the emotion on our veterans’ faces and suddenly realise that, regardless of their own political position, they neither own the poppy, nor truly understand what that little red flower means to Erskine veterans.

“They would surely have to concede that they can’t really speak for any of us regarding the poppy’s relevance to Erskine or the wider military and veteran family across the country.”

He added: “At Erskine, we will continue to wear that little red flower.

“Our remembrance services will honour the sacrifices of all who were lost or wounded, during wars of national survival in Europe, or subsequent military and peacekeeping operations around the world.

“We care for those who returned, to remember those who did not with heartfelt hope of enduring peace.”