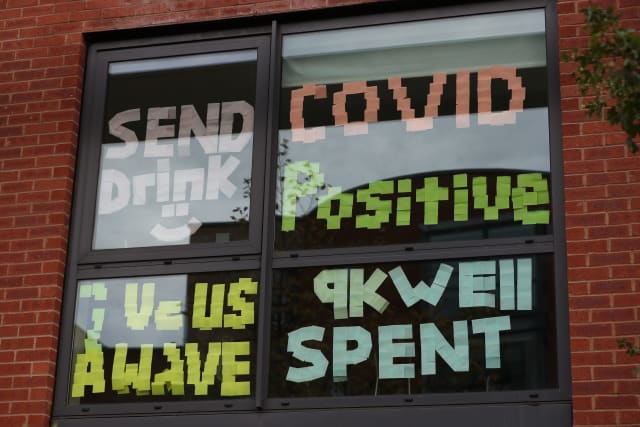 University students have been urged to sign up for rapid coronavirus tests and reduce their social interactions under plans to get them home safely for Christmas.

Students in England will be allocated staggered departure dates during a “travel window” between December 3 and December 9 so they can return home after the four-week lockdown.

Students will be encouraged to take an asymptomatic test at “targeted” universities in England, while teaching will move online by December 9 so students have enough time to self-isolate if needed.

In Wales, universities will end most in-person lessons in the week ending December 8 and students will be offered the use of a voluntary coronavirus test 24 hours before they travel home in early December.

In Scotland, students are being recommended to take two lateral flow tests – five days apart – which can provide results in 30 minutes before returning to their families for Christmas.

Students in Scotland who want to go home for the festive break are being advised to “reduce their social mixing for two weeks” beforehand and only go out for “essential reasons and exercise”.

Speaking on BBC Breakfast, Universities Minister Michelle Donelan urged students travelling home to England from other parts of the UK – which have not been subject to a four-week lockdown – to undertake at least a fortnight of “refined behaviour” before returning to their families for Christmas.

The Department for Education (DfE) guidance says universities should not restart any social and extra-curricular activities when national restrictions end – and they should work with hospitality settings to discourage opportunities for students to “socialise extensively”.

If a student in England tests positive for Covid-19 on or before December 9, they must self-isolate at university for a period of 10 days, according to the DfE.

Asked why students were not being told to isolate for a fortnight, Ms Donelan said it had been a “very difficult” term for students and the Government wants to allow them to go home for Christmas.

But the University and College Union (UCU) has said the Government’s plans are “riddled with holes” and they warned that the tight timescale for a mass movement of students “left little room for error.”

The Government is under pressure from sector leaders to ensure testing capacity is established in time for the start of the spring term so students can safely resume their studies in-person when they return in January.

Dr David Nabarro, one of the World Health Organisation (WHO) special envoys on Covid-19, urged people to be “careful” when students return to university after Christmas.

He told Sky News: “So if there’s going to be a big return in January, all I’m going to say is, everybody be careful. Because that’s when the virus can really move around quickly.”

Larissa Kennedy, president of the National Union of Students (NUS), said: “The Government must now ensure that universities have enough resource to cope with the mass demand for this testing.

“We do now need a clear strategy for January return: students deserve better than another term of uncertainty.”

Ms Donelan said rapid testing would form a “key part” of the Government’s plan to get students back to university after Christmas. But she insisted that students would not have to test negative.

“What we’re saying is that it’s going to be a part of the return to university in January,” she told Sky News.

The minister said she expected Northern Ireland to set out their plans for students in the coming days.