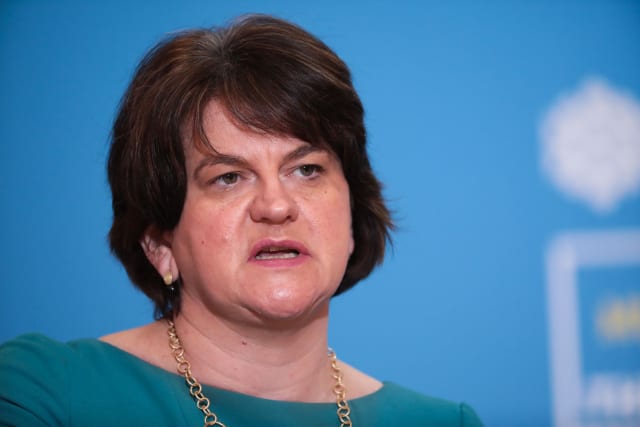 Divisions at the head of the Stormont executive have been laid bare as ministers struggle to agree new coronavirus restrictions for Northern Ireland.

The administration’s two main parties – the DUP and Sinn Fein – are engaged in a claim and counterclaim spat amid a failure to reach consensus ahead of the looming end to the current circuit-break lockdown.

Ministers were due to resume talks on Wednesday on proposals to partially reopen the hospitality sector after late night meetings on Monday and Tuesday broke up without agreement.

Northern Ireland’s four-week circuit-break lockdown ends at midnight on Thursday, at which point regulations that have forced the closure of much of the hospitality sector will fall away.

The administration is facing mounting criticism for failing to tell businesses whether they will be able to reopen on Friday.

The DUP and Sinn Fein are at odds over a proposal from health minister Robin Swann to extend the circuit-break in its entirety for two weeks.

The DUP strongly opposes that idea and used its veto to block the move during Tuesday’s executive meeting.

That tactic drew criticism from Sinn Fein and the other three executive parties.

But the DUP is understood to be furious at Sinn Fein’s decision to back Mr Swann’s proposal.

The party believes Sinn Fein has backtracked on an apparent pledge to endorse the reopening of cafes and restaurants.

DUP First Minister Arlene Foster said her partners in government had to explain why they had changed position.

Mrs Foster pointed to a Sunday media interview in which Sinn Fein Deputy First Minister Michelle O’Neill said the executive was looking at ways of “opening things up perhaps without alcohol”.

“She (Ms O’Neill) advocated a wide range of relaxations she said she was proposing that to the executive and I think it is a matter for Sinn Fein as to why they now are in a situation, despite the fact there has been no change in the medical advice, none whatsoever, as to why they are now in a completely different scenario,” she told the BBC.

“They are (now) saying let us keep hairdressers and beauticians closed, let us keep coffee shops on our high streets closed and roll it over for another two weeks in the knowledge that in two weeks’ time things will not have changed and we will be back in exactly the same position, faced with exactly the same decision.”

The claims have been robustly rejected by Sinn Fein, with the party insisting it was acting in line with medical and scientific advice.

A senior Sinn Fein source said: “We always said any movement had to be based on medical advice.”

The DUP used a contentious Stormont mechanism – a cross-community vote – to effectively veto the proposal, despite support for the move by a majority of executive parties.

Mr Swann and senior health officials had warned that Covid-19 cases were likely to spike again in mid-December if the fortnight extension was not approved.

She tweeted: “And the situation in the north of Ireland is that @duponline have used their veto in Executive to reject the Health Minister’s recommendation & are ignoring CMO’s advice to extend lockdown by 2 weeks. While our hospitals & staff are creaking at the seams #madness.”

During Tuesday’s executive meeting, Alliance Party justice minister Naomi Long was particularly critical of the deployment of the cross-community vote – a mechanism designed to protect minority rights in a post-conflict society – to torpedo health regulations.

Those discussions were due to resume on Wednesday.

The PA news agency understands those measures include:

– Close contact services, including hairdressing, beauty treatments and driving lessons, resuming on November 13 by appointment only.

– Unlicensed premises, including cafes and coffee shops, reopening on November 13.

– Hotels able to serve food and alcohol to residents.

– Licensed premises remaining closed until November 27. A “safely open group”, involving hospitality sector and executive, to be established to oversee this move.

– Pubs and bars able to offer sealed off-sales from November 13.

Ahead of the meeting on Wednesday, Mrs Dodds published data suggesting that the four-week circuit-break had resulted in a £400 million loss for the local economy.