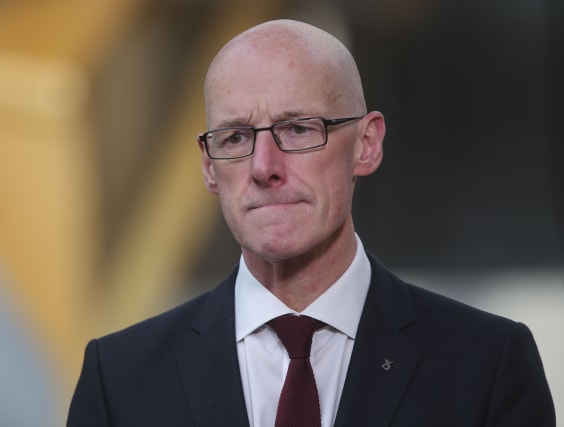 Deputy First Minister John Swinney has been asked to hand over the legal advice the Scottish Government received about its unlawful investigation into Alex Salmond by Friday.

The Scottish Government has repeatedly refused to reveal the guidance it received about the legal challenge over the botched investigation of the former first minister.

In a parliamentary debate last week, MSPs called for the Scottish Government to waive its legal privilege and “publish all the legal advice it received”.

Mr Swinney said he and the Cabinet will “consider the implications of the motion”.

Linda Fabiani, the convener of the Committee on the Scottish Government Handling of Harassment Complaints, has now set a deadline of Friday November 13 for Mr Swinney to hand it over.

“The committee assumes that the outcome of the Government’s deliberations on the will of Parliament will soon be forthcoming,” she wrote.

“Given the committee is taking evidence from the lord advocate and the permanent secretary on Tuesday November 17 on the judicial review, the committee requests that the Scottish Government provides the legal advice without further delay and by Friday November 13 at the latest to allow members sufficient opportunity to consider it prior to the permanent secretary and lord advocate appearing before us.”

In January 2019, the Court of Session ruled prior communication between investigating officer Judith MacKinnon and two women who came forward with complaints meant the inquiry was unlawful.

Lord Pentland added the Government’s actions were “procedurally unfair and they were tainted with apparent bias”.

The Scottish Government ultimately conceded the case and the legal bill totalled more than £630,000 – including a £512,250 payout to Mr Salmond.

MSPs have raised questions about why the decision to concede was taken more than two months after the damning evidence of prior communication between the investigator and complainants was discovered.

The committee has accused the Scottish Government of obstruction and said it has been “completely frustrated” by a lack of evidence.

In response, the Scottish Conservatives tabled a debate with the motion calling for the Scottish Government to waive legal privilege and provide details of the advice it received about its unlawful investigation of Mr Salmond.

Only SNP MSPs voted to withhold the information and the Scottish Government was defeated by 63 votes to 54.

“Ministers always seek to respect the decisions taken by Parliament,” he said.

“I will now consider the implications of the motion with my ministerial colleagues, consistent with our obligation in the ministerial code, and advise Parliament accordingly of our response.”

Scottish Conservative MSP Murdo Fraser said he expects the Scottish Government to respect the parliamentary vote and “produce the missing documentation as a matter of urgency”.

“To do otherwise would be unforgivable,” he added.

During First Minister’s Questions last Thursday, Nicola Sturgeon said she would be “blatantly breaching” the ministerial code if she released the advice her Government received from lawyers during the legal battle with her predecessor.

She said consent to release legal advice will “only be given if there are compelling reasons”.

“I have rightly, I think, recused myself from that decision and as John Swinney said to Parliament last night he will advise Parliament accordingly in due course of our response.”