Johnson: Everyone eligible should get a coronavirus vaccine 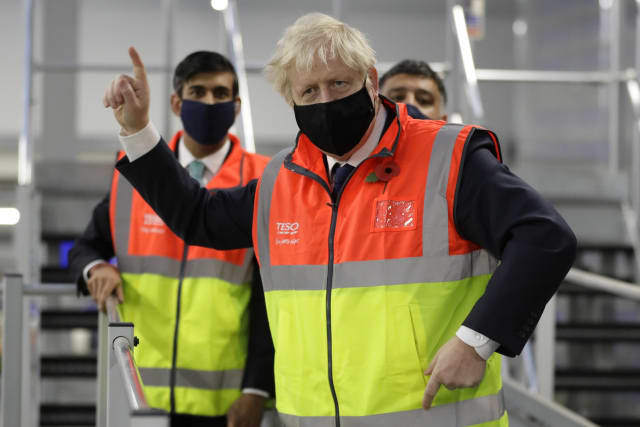 Boris Johnson has said everyone who is eligible should “definitely” get a coronavirus vaccine as the official UK death toll from the disease passed 50,000.

The Prime Minister said he would have “no inhibitions” about getting a vaccine himself as he dismissed the arguments of the so-called anti-vaxxers as “total nonsense”.

It came after Professor Jonathan Van-Tam, the deputy chief medical officer for England, said they were preparing for the most important vaccination programme “in decades” – a reference to the news that a vaccine being developed by Pfizer-BioNTech had proved 90% effective.

During a visit to a supermarket distribution centre in south-east London, the Prime Minister said that once a vaccine was cleared for use, it was essential to ensure there was as wide a take-up as possible.

“I have got no inhibitions about getting a vaccine,” he told reporters.

“Certainly I would say to everybody anti-vaxx is total nonsense – you should definitely get a vaccine.”

The call appears to reflect concerns among officials that misinformation by anti-vaxxers could deter some people from getting the vaccine.

At a Downing Street press conference on Wednesday, Prof Van-Tam said he had advised his own mother that she should get it.

“If I could be at the front of the queue, then I would be. I think the ‘mum test’ is very important here,” he said.

“My mum is 78 – she will be 79 shortly – and I have already said to her: ‘Mum, make sure when you are called you are ready. Be ready to take this up. This is really important for you because of your age’.”

The appeal came as the latest Government data showed 50,365 people had died in the UK within 28 days of testing positive for Covid-19. However, other statistics suggest the true figure for coronavirus deaths could be more than 65,000.

Labour leader Sir Keir Starmer said it was another “grim milestone” in the pandemic, accusing the Government of again being too slow to act as it entered the latest phase.

“We owe it to all of the families who are grieving to get on top of the virus and head towards a vaccine and that’s what the Government must absolutely focus on now,” he said.

Mr Johnson said every death from the disease was a tragedy and that while the prospects of a vaccine and mass testing offered hope, it was essential people continued to observe social-distancing rules.

“We have two boxing gloves to pummel the disease in the weeks and months that follow,” he said.

“But I have got to stress that we are not out of the woods yet. It does require everybody to follow the guidance.”