How can university students return home safely for Christmas? 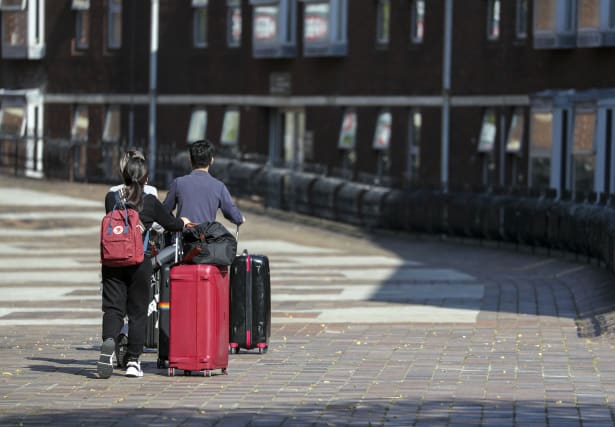 Students in England and Wales will be allowed to travel back to their family homes for Christmas.

But universities have been told to introduce a series of measures to ensure students can return safely.

– When can students leave university?

University students in England will be able to return home during a “travel window” between December 3 and December 9 – which comes into force after the national four-week lockdown.

Universities will set staggered departure dates – and work with other institutions in the region to manage pressure on transport infrastructure.

Students can stay at university after December 9, but if they contract Covid-19, or are identified as a contact of someone who does, they will not be able to travel home during the 14-day period of self-isolation.

In Wales – where the country’s 17-day lockdown ended at the start of this month – students have been asked to “stay put” and not return to their families until the first week of December.

University students in Wales who want to travel home for Christmas have been told to make arrangements to move from their term-time accommodation by December 9 at the latest.

– What will happen to in-person teaching?

Universities in England have been told to end face-to-face teaching on campus by December 9 so students have enough time to complete self-isolation before returning home for Christmas.

Institutions should plan to have moved all teaching online by December 9 so students can finish their studies from home. Universities can end face-to-face lessons before December 3 if they wish.

But healthcare students who are on placements can remain in their placements until the end of term.

In Wales, universities will end the majority of in-person lessons in the week ending December 8.

– Should students be avoiding social activities before they go home?

Universities in England have been told not to restart any social and extracurricular activities when the period of national restrictions ends on December 2.

Institutions have been told to work with hospitality settings in the local area to discourage opportunities for students to “socialise extensively” before returning home.

Students studying in Wales, Scotland or Northern Ireland – who have not been in the second lockdown – have been told to undertake a period of at least 14 days of reduced contact (similar to the measures in place during the national restrictions) either before or after returning home to England.

University students in Wales will also be asked to minimise their social contact with others in the run up to the end of term.

– Will all universities be offering rapid Covid tests for students?

The Government will utilise lateral flow devices (LFD) – which can turnaround results within an hour at the location of the test – at universities in England to support the return home of students in December.

Testing will be targeted based on a range of factors – including local prevalence rates, whether testing is available already, and the percentage of high-risk students in each institution.

Testing would have to be completed by December 9 to allow students who test positive to complete isolation at university before returning home.

Students will be encouraged to take a test at “targeted higher education providers”, but LFD tests will not be available in all locations in England.

Students that do not have access to LFD tests can return home in the “travel window” if they are not symptomatic, or after isolating if they have been advised to do so by NHS Test and Trace.

In Wales, students will also be asked to sign up for voluntary lateral flow tests if they plan on travelling home.

The self-administered test – which uses a nose and throat swab – should be taken within 24 hours of a student’s intended travel date.

Testing facilities are set to become available at participating universities in Wales within the next few weeks.

– What is the plan for the return to university in January?

The Department for Education (DfE) has said it is looking to utilise mass testing to make the return to higher education in January “as safe as possible”.

It has said it will provide further guidance in due course.

– What about students in Scotland and Northern Ireland?

UK universities minister Michelle Donelan has said she expects the devolved nations to publish their plans for students returning home in the coming days.