French and British tributes paid after death of D-Day veteran 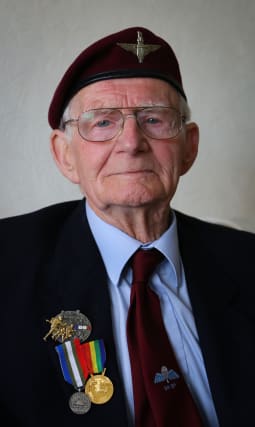 Officials from France and the UK have paid tribute to a “valiant” Second World War veteran who died after contracting Covid-19.

The D-day hero, who escaped capture by the Germans with the help of the French resistance, was due to be honoured by a street named after him in Merville-Franceville-Plage in Normandy, northern France, next May.

He spent his last few days in hospital where doctors were trying to build up his strength after he had suffered a few falls at home.

Sadly, Mr Glover picked up a chest infection which was diagnosed as Covid-19.

His son Richard said: “As a family, not only were we proud of his service to his country but we were also proud to have him as a dad, grandad and great-grandad.

“He made such an impact on all our lives. We will miss you so much.”

Dick Goodwin, vice president of The Taxi Charity for Military Veterans, said: “Everyone in the Taxi Charity family loved spending time with Fred. He was a real character who always filled the room with warmth and laughter and he will be sorely missed.”

Mr Glover was just a teenager when he joined the 9th Parachute Battalion during the Second World War.

He was injured in both legs by German anti-aircraft fire during a glider landing in Normandy on D-Day as part of an assault on a gun battery near the village of Merville.

As fighting raged on the ground, Mr Glover’s wounds meant he was left behind by his comrades with two German prisoners.

One of the Germans was in pain, so Mr Glover, in an act that would save his life, shared his morphine with him.

When German reinforcements arrived, Mr Glover was captured and destined to be shot until the German officer he had helped asked for him to be spared.

Instead Mr Glover was taken as a prisoner of war to the Pitié-Salpêtrière Hospital in Paris.

There, Mr Glover was able to link up with the French resistance who helped plan his escape by staging an incident outside the hospital’s main gate while he headed to a laundry room window.

The paratrooper, carrying a bed pan, successfully evaded the guards and was later flown back to the UK after the Paris Liberation.

Mr Glover returned to his battalion and later saw action in the Battle of the Bulge, the last major German offensive of the war on the Western Front.

Edward Llewellyn, the British Ambassador to France, expressed “great sadness” at Mr Glover’s death and recalled meeting him and other veterans at a ceremony at the Merville Battery in 2018.

“It was such an honour to be standing at that site alongside Fred and his other comrades from 9 Para who had been there on D-Day and taken part in the assault – and to witness their determination to make sure their mates who did not survive were not forgotten,” he said.

“I remember Fred’s ready smile and how he helped gather us all for a photo, a photo which I treasure.”

He added: “I am honoured to have met Fred Glover – my sympathy to his family and his friends.”

Pierre-Andre Durand, prefet of the region of Normandy, said: “This valiant paratrooper is one of those unsung heroes of the D-Day landings in Normandy.

“He was dedicated to the memory of his brothers in arms and always grateful for the help the French resistance had provided him and would endlessly share with the young his commitment towards freedom.

“In the name of the French-British friendship and with gratitude for the services rendered by Frederick Glover, I extend my deepest sympathy to his family and all his loved ones.”