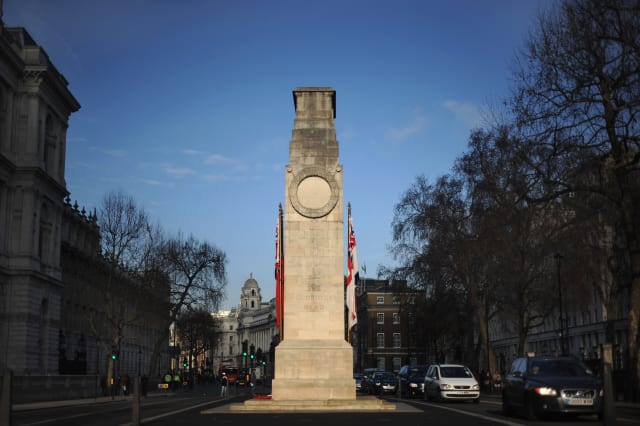 Extinction Rebellion have staged a protest at the Cenotaph on Remembrance Day.

The climate protesters unveiled a banner reading ‘Honour Their Sacrifice, Climate Change Means War’ at the memorial on Whitehall, in central London.

After the banner was displayed, British Army veteran and Extinction Rebellion member Donald Bell observed a two-minute silence before hanging a wreath.

Mr Bell, 64, who completed four tours in Northern Ireland during the Troubles, said “unchecked climate change means a return to a world at war”.

“I took action today knowing that I would be criticised,” he said. “I knew that I would be accused of being disrespectful and hated by many for speaking out in this way. Remembrance Day is never an easy time for veterans and this was not an easy decision for me to make.

“This Government’s own climate advisers, the committee on climate change, said last year that they have a ‘Dad’s Army’ approach to protecting British people from the impacts of climate change.

“Their report in June this year showed that the Government has failed to meet all but two of the 31 milestones it set itself for reducing emissions. This Government is criminally negligent and young people today will pay the price for their failure.”