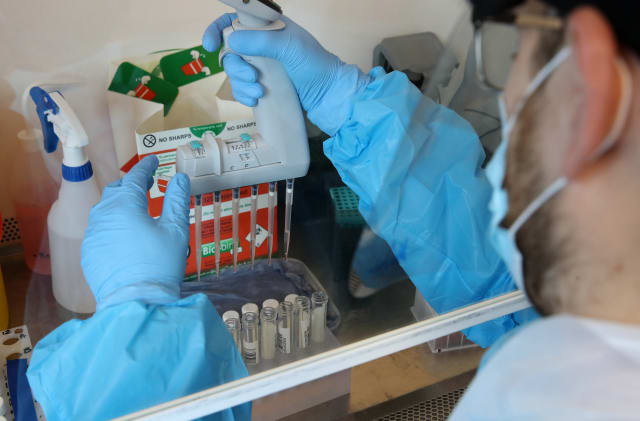 Leading doctors have said it is “vital that lessons are learned” from the pandemic as the UK’s official coronavirus death toll exceeded 50,000.

The British Medical Association (BMA) said the figures were a “terrible indictment” of the Government’s lack of preparation and organisation with regard to handling the virus.

The latest Government data showed 50,365 people had died in the UK within 28 days of testing positive for Covid-19, making it the first country in Europe to exceed 50,000 deaths.

Responding to the news, Dr Chaand Nagpaul, BMA council chairman, said: “This is a point that should never have been reached.

“In March, Professor Steve Powis said that if the public adhered to the nationwide lockdown the total toll could be kept below 20,000.

“Today’s figure is a terrible indictment of poor preparation, poor organisation by the Government, insufficient infection control measures, coupled with late and often confusing messaging for the public.”

He added: “As we look towards the hope of a vaccine, it’s vital that lessons are learned from the last nine months to ensure that nothing on this scale ever happens again.”

Meanwhile scientists remain hopeful about the prospect of a vaccine, with England’s deputy chief medical officer Professor Jonathan Van-Tam stating the Government was preparing for the most important vaccination programme “in decades”.

Prime Minister Boris Johnson said everyone who is eligible should “definitely” get a vaccine as he dismissed the arguments of the so-called anti-vaxxers as “total nonsense”.

During a visit to a supermarket distribution centre in south-east London, he said that once a vaccine was cleared for use, it was essential to ensure there was as wide a take-up as possible.

“I have got no inhibitions about getting a vaccine,” Mr Johnson told reporters.

“Certainly I would say to everybody anti-vaxx is total nonsense – you should definitely get a vaccine.”

The former journalist said in a statement, less than 24 hours after it was reported he was to be promoted to chief of staff, that he had decided to leave No 10 at the end of the year.

Meanwhile, Labour leader Sir Keir Starmer said the UK’s death toll was another “grim milestone” in the pandemic, accusing the Government of again being too slow to act as it entered the latest phase.

“We owe it to all of the families who are grieving to get on top of the virus and head towards a vaccine and that’s what the Government must absolutely focus on now,” he said.

Deaths of coronavirus patients in Scotland also reached a six-month high after 64 were recorded in the past in 24 hours, First Minister Nicola Sturgeon said, the highest figure since May 6.

Separate figures published by the UK’s statistics agencies for deaths when Covid-19 has been mentioned on the death certificate, together with additional data on deaths that have occurred in recent days, show there have now been more than 65,000 deaths involving coronavirus in the UK.

Ministers have said they do not expect the mass roll-out of a vaccine to begin until next year.

Downing Street said that it would not be made available until the regulator, the Medicines and Healthcare products Regulatory Agency (MHRA), was satisfied that it was safe.

“Any vaccines which are determined for use will undergo a vigorous series of safety checks, they will be absolutely safe for the public to use,” the Prime Minister’s official spokesman said.

Meanwhile students in England will be allocated staggered departure dates during a “travel window” between December 3 and December 9 so they can return home after the four-week lockdown.

Students will be encouraged to take an asymptomatic test at “targeted” universities in England, while teaching will move online by December 9 so students have enough time to self-isolate if needed.

In Wales, universities will end most in-person lessons in the week ending December 8 and students will be offered the use of a voluntary coronavirus test 24 hours before they travel home in early December.

Students in Scotland who want to go home for the festive break are being advised to “reduce their social mixing for two weeks” beforehand and only go out for “essential reasons and exercise” while they are also encouraged to take two lateral flow tests five days apart before returning to their families.