Disruption to last for several days after freight train derailment 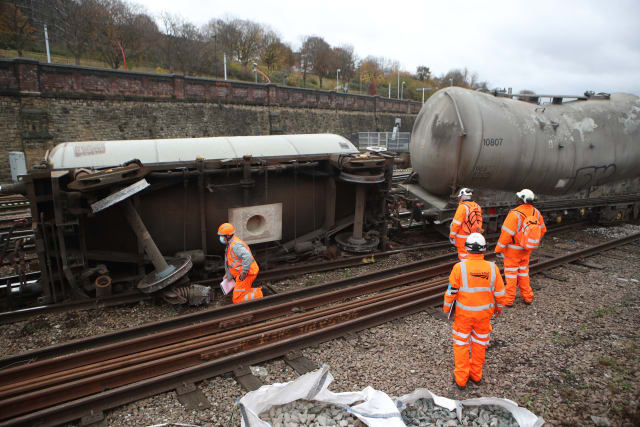 Passenger rail services will be disrupted for several days after a freight train derailed at Sheffield station, Network Rail said.

There has been major disruption to Northern, TransPennine Express, CrossCountry and East Midlands Railway services since the incident happened at 2.45am on Wednesday.

Network Rail said the 34-wagon cement-carrying freight train was travelling at a “slow speed” when the derailment happened. No-one was injured.

Removal of the train will require the use of cranes.

Once this has taken place, engineers will carry out “substantial repairs” to the tracks and signalling system, which suffered “significant damage”.

The arrival of the cranes will require a partial road closure on the A61, which runs in front of Sheffield station.

An investigation into the derailment has been launched by the Rail Accident Investigation Branch.

The train was travelling from Hope, Derbyshire, to Dewsbury, West Yorkshire, when it came off the tracks as it passed through the station.

Network Rail route director Matt Rice said: “This is a significant incident, so it’s only right that we take time to find out all of the facts and understand what has caused this.

“Once it is safe to do so, we will start work to remove the train, better assess the extent of the damage and make a plan for repairs.

“This process is taking some time and we are sorry for the disruption which this is causing. There will still be service changes tomorrow (Thursday) and over the coming days.

“We urge anyone planning to travel to, from or via Sheffield to check before travelling.”

Northern and East Midlands Railway services will continue to be disrupted on Thursday, but CrossCountry and TransPennine Express expect to operate full timetables.

The derailment of a freight train near Llanelli, South Wales, on August 26 led to the spillage of 330,000 litres of fuel, causing a huge fire.