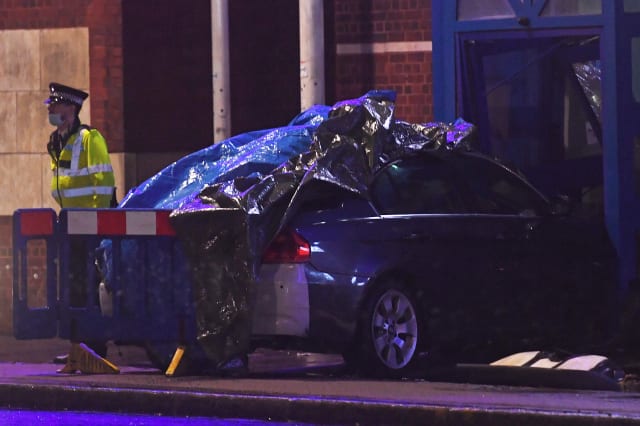 An incident where a man poured liquid onto a road and set it alight moments after a car crashed into a police station is not being treated as terror-related, police said.

A man in his 40s has been arrested on suspicion of arson and other offences in connection with the incident, police added.

Commander Ade Adelekan said: “This appears to have been an isolated incident and does not seem to be terror-related. I am satisfied that there is no wider risk to the community.”

Footage posted online showed a man leaving the car and pouring a substance onto the road from a container, as onlookers watch on in horror.

Standing in front of a double-decker bus, he then set the liquid on fire.

Witnesses can be heard shouting as a police car pulls up and officers run out to tackle the man at a bus stop metres away.

Another police officer appears to use a fire extinguisher to put out the flames on the road.

Store manager Ogur Mazlum, 34, works nearby and witnessed the moment the car crashed into the police station.

Speaking on behalf of Mr Mazlum, who speaks limited English, his wife Serife Mazlum, 32, told the PA news agency: “He literally just walked out (of his shop) to just call me and see if everything’s OK at home.

“Then he said I have to shut the phone quickly.

“That was when the car crashed into the front of the police station.”

No injuries to any police officers or members of the public were reported, police said.