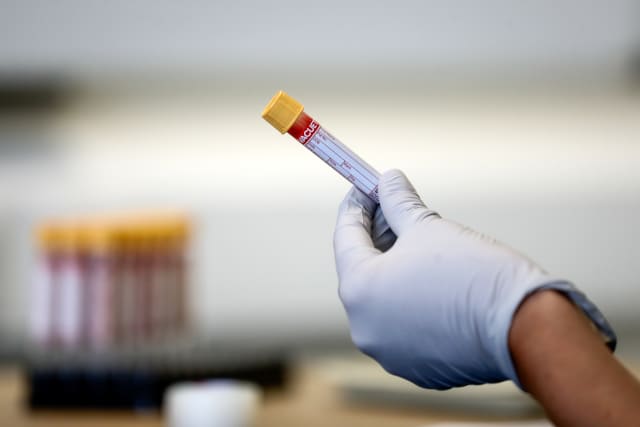 The accuracy of a rapid finger-prick antibody test for coronavirus may be considerably lower than previously indicated, a new study suggests.

The results, published in the BMJ, suggest that if 10% of people given the test had previously been infected, around one in five positive test results would be false positives.

Researchers say these conclusions contrast with an earlier study, not yet peer reviewed, which suggested that the tests gave no false positives.

The AbC-19 Rapid Test uses a drop of blood from a finger-prick to see if it’s likely that someone has previously been infected with SARS-CoV-2.

It gives results in 20 minutes without the need to go to a laboratory, and is approved for use by health professionals in the UK and EU.

Scientists, from Public Health England and the universities of Bristol, Cambridge and Warwick, tested blood samples from 2,847 key workers – healthcare, fire, and police staff – in England in June 2020.

Of these, 268 had a previously tested positive for Covid-19 so were known positives, while the remaining 2,579 had unknown previous infection status.

The scientists estimated the sensitivity – ability to correctly identify a true positive sample – of the AbC-19 test to be 92.5% based on PCR confirmed cases, but considerably lower (84.7%) in people with unknown previous infection status prior to antibody testing.

They suggest this difference is probably due to the test being more sensitive when antibody levels are higher.

As people with a positive PCR result tended to have more severe disease, it is likely that they would have produced more antibodies.

Researchers say the lower figure of 84.7% is probably a more realistic estimate of test sensitivity in the real world.

Therefore if one million people were tested with AbC-19, of whom 10% had been previously infected with Covid-19, there would be 18,900 false positive results.

Overall, about one in five positive results would be wrong, they suggest.

The study also found that trained lab staff disagreed on whether the result was positive or negative for almost 4% of AbC-19 tests.

This implies test accuracy could be lower still if the test was used at home by members of the public.

The researchers note a number of limitations to their study such as the fact that the test was evaluated in a laboratory rather than having participants perform the test themselves – which may have overestimated performance.

They also note that the study did not include many people over the age of 65, suggesting further evaluation is needed in those for whom the risk of severe Covid-19 is substantially higher.

The UK Government has placed an order for one million AbC-19 tests for research purposes to help build up a picture of how the virus has spread across the country.

In a related editorial, Dipender Gill at Imperial College London and Mark Ponsford at Cardiff University wrote: “(This study) identifies notable limitations of the UK government’s antibody test of choice and provides good evidence that its specificity in a ‘real life’ setting is highly unlikely to be 100%.”

Nevertheless, the researchers did find in lab settings that 97.9% of people who did not have Covid-19 were given negative results by the tests.

How will the Government decide which parts of England will go in which tier?