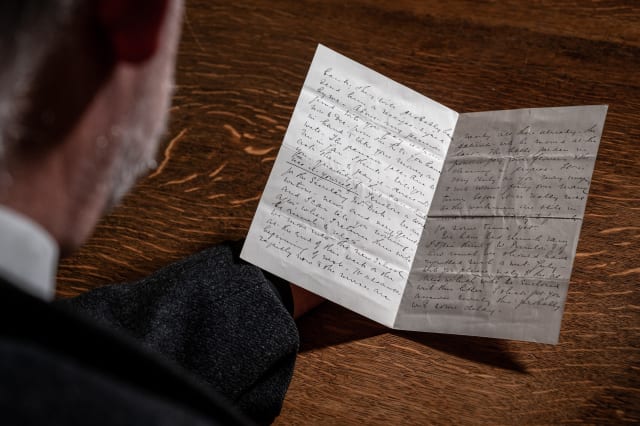 The last letter that a First World War heroine sent to her mother before her arrest and execution has been gifted to the cathedral where her remains are buried.

British nurse Edith Cavell helped save the lives of soldiers on both sides of the conflict while working in German-occupied Belgium.

She was executed by a German firing squad on October 12 1915 for helping some 200 Allied prisoners escape to the Netherlands.

Norwich Cathedral, in her home county, has been gifted a four-page letter that she wrote to her mother Louisa days before she was arrested by the Germans.

The letter is dated July 26 1915 and Miss Cavell was taken from the hospital where she was working on August 5.

In the letter, she ensures her mother will be the beneficiary of a pension she has established.

She also mentions her work and makes reference to her sheepdog Jackie.

She signs off her letter: “My dearest love to you & all the family.

“I am looking forward to a happy meeting later on.

“Ever your affectionate daughter.”

The Revd Dr Peter Doll, Canon Librarian and Vice-Dean at Norwich Cathedral, said: “It was definitely the last letter that her mother received from her.

“Edith did write the night before she died but the German military never released it, probably for fear of its propaganda value.”

He said that the letter is a “wonderful gift that will be treasured” by the cathedral and gives “real insight into her life and activities just prior to her arrest”.

“Nurse Cavell’s letter is of immense historical value and our intention is for the letter to go on public display in the cathedral at some point in the near future and to ensure that it is safely preserved for generations to come,” he said.

Dr Doll added that in the letter Miss Cavell is “trying to remain positive for her mother’s sake”. However, he said there were “indications of the turmoil in which she was living”, including the care she took to ensure her mother could benefit from her pension.

Miss Cavell famously said the day before her execution: “Patriotism is not enough.

“I must have no hatred or bitterness towards anyone.”

The letter was gifted to the cathedral by expat Greg Stewart, who had received it from his friend the late poet and playwright Roger Frith.

Mr Stewart grew up in the same Essex village as Mr Frith, but now lives in Canada.

Mr Frith’s family had originally been gifted the letter by the Cavells.

Having learned of Norwich Cathedral’s connection with Miss Cavell, Mr Stewart said: “I had no doubt that this is where the letter should permanently reside.”